Sixteen-year-old Sunday Balewo is next in line for the presidency of Zantuga. When his father dies, Sunday finds himself on the run from the unlikeliest of assassins - a baboon with a bomb. Not just an action-packed thriller, but a novel about friendship, loyalty and the value of life itself.

Other Editions - Three by Justin D'Ath 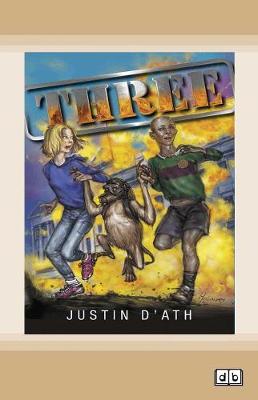 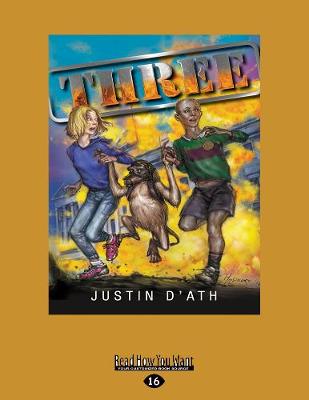 » Have you read this book? We'd like to know what you think about it - write a review about Three book by Justin D'Ath and you'll earn 50c in Boomerang Bucks loyalty dollars (you must be a Boomerang Books Account Holder - it's free to sign up and there are great benefits!)

Three is an explosive page-turner set in a small African country about three friends: a boy, a girl and a talking baboon. Sunday Balewo, a professional footballer and the son of the assassinated president is targeted by the same intelligent baboons that killed his father. Befriending the baboon sent to kill him, Sunday, with his girlfriend Holly, work together to stop the man behind the baboons' corruption. One of the three friends will be orphaned, one will be shot and one will die. This action-packed fantasy will be a story that every reader is guaranteed to enjoy. I loved the fast pace of the story which kept me wanting to keep reading. Also the story is written in the first person, which allowed me to get a great insight into the character Sunday and his relationship with the baboon. Recommended for readers 11+ to get the most out of this amazing story. Rating 9/10

Justin D'Ath lives in Queenscliff, Victoria. He has written 50 books for children and young adults. His 12-book Extreme Adventure series have been published worldwide and made into a popular TV series. His YA novel, Pool, was short-listed in the Victorian Premier's Awards. He has written six CBC Notable Books and gained five Yabba/Koala nominations. Also by Justin D'Ath: Pool, Extreme Adventures series, Mission Fox series, Lost World Circus series and Stuff Happens: Cooper.