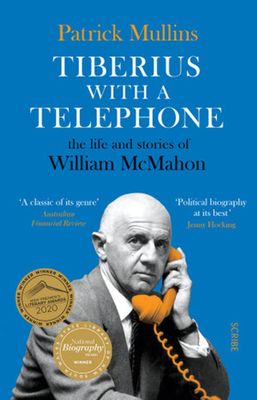 Tiberius with a Telephone: The life and stories of William McMahon

Description - Tiberius with a Telephone: The life and stories of William McMahon by Patrick Mullins

Winner of the 2020 National Biography Award and the 2020 NSW Premier's Non-Fiction Award.

The oddly compelling story of a man regarded as Australia's worst prime minister.

William McMahon was a significant, if widely derided and disliked, figure in Australian politics in the second half of the twentieth century. This biography tells the story of his life, his career, and his doomed attempts to recast views of his much-maligned time as Australia's prime minister.

After a long ministerial career under Menzies, McMahon became treasurer under Harold Holt, and fought a fierce, bitter war over protectionism with John McEwen. Following Holt's death in 1967, McEwen had his revenge by vetoing McMahon's candidature for the Liberal Party's leadership, and thus paved the way for John Gorton to become prime minister. But almost three years later, amid acrimony and division, McMahon would topple Gorton and fulfill his life's ambition to become Australia's prime minister.

In office, McMahon worked furiously to enact an agenda that grappled with the profound changes reshaping Australia. He withdrew combat forces from Vietnam, legislated for Commonwealth government involvement in childcare, established the National Urban and Regional Development Authority and the first Department of the Environment, began phasing out the means test on pensions, sought to control foreign investments, and accelerated the timetable for the independence of Papua New Guinea. But his failures would overshadow his successes, and by the time of the 1972 election McMahon would lead a divided, tired, and rancorous party to defeat.

A man whose life was coloured by tragedy, comedy, persistence, courage, farce, and failure, McMahon's story has never been told at length. Tiberius with a Telephone fills that gap, using deep archival research and extensive interviews with McMahon's contemporaries and colleagues. It is a tour de force - an authoritative and colourful account of a unique politician and a vital period in Australia's history.

'This is, as others have remarked, biography at its best- diligently researched, with detail nowhere else examined, and a demonstration of fine judgement concerning the crucial interplay between personal disposition, role demands, and historical context.'
-James Walter, Australian Book Review

'A welcome addition to prime ministerial biography ... An engaging and informative read.'
-Troy Bramston, The Australian

'This is the most detailed investigation and explanation of what happened ... Completing a biography of this scope is an enormous undertaking, and Patrick Mullins does it with considerable skill ... Mullins conveys the turmoil, the atmosphere of crisis, the bickering and the bloodletting that marked this extraordinary period of Australian political history.'
-David Solomon, Inside Story

Buy Tiberius with a Telephone: The life and stories of William McMahon by Patrick Mullins from Australia's Online Independent Bookstore, Boomerang Books.

Other Editions - Tiberius with a Telephone: The life and stories of William McMahon by Patrick Mullins 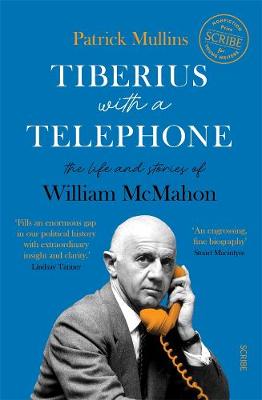 Book Reviews - Tiberius with a Telephone: The life and stories of William McMahon by Patrick Mullins

» Have you read this book? We'd like to know what you think about it - write a review about Tiberius with a Telephone: The life and stories of William McMahon book by Patrick Mullins and you'll earn 50c in Boomerang Bucks loyalty dollars (you must be a Boomerang Books Account Holder - it's free to sign up and there are great benefits!)


A Preview for this title is currently not available.
More Books By Patrick Mullins
View All