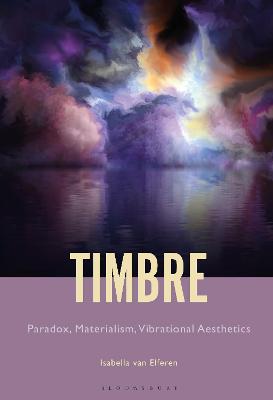 Timbre is among the most important and the most elusive aspects of music. Visceral and immediate in its sonic properties, yet also considered sublime and ineffable, timbre finds itself caught up in metaphors: tone "color", "wet" acoustics, or in Schoenberg's words, "the illusory stuff of our dreams." This multi-disciplinary approach to timbre assesses the acoustic, corporeal, performative, and aesthetic dimensions of tone color in Western music practice and philosophy. It develops a new theorization of timbre and its crucial role in the epistemology of musical materialism through a vital materialist aesthetics in which conventional binaries and dualisms are superseded by a vibrant continuum.

As the aesthetic and epistemological questions foregrounded by timbre are not restricted to isolated periods in music history or individual genres, but have pervaded Western musical aesthetics since early Modernity, the book discusses musical examples taken from both "classical" and "popular" music. These range, in "classical" music, from the Middle Ages through the Baroque, the belcanto opera and electronic music to saturated music; and, in "popular" music, from indie through soul and ballad to dark industrial.

» Have you read this book? We'd like to know what you think about it - write a review about Timbre: Paradox, Materialism, Vibrational Aesthetics book by Professor or Dr. Isabella Van Elferen and you'll earn 50c in Boomerang Bucks loyalty dollars (you must be a Boomerang Books Account Holder - it's free to sign up and there are great benefits!)