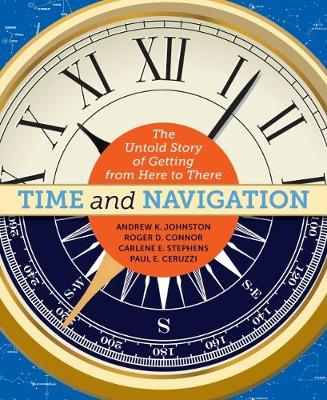 If you want to know where you are, you need a good clock. The surprising connection between time and placeis explored inTime and Navigation- The Untold Story of Getting from Here to There, the companion book to the National Air and Space Museum exhibition of the same name.

Today we use smartphones and GPS, but navigating has not always been so easy. The oldest "clock" is Earth itself, and the oldest means of keeping time came from observing changes in the sky. Early mariners like the Vikings accomplished amazing feats of navigation without using clocks at all. Pioneering seafarers in the Age of Exploration used dead reckoning and celestial navigation; later innovations such as sextants and marine chronometers honed these techniques by measuring latitude and longitude. When explorers turned their sights to the skies, they built on what had been learned at sea. For example, Charles Lindbergh used a bubble sextant on his record-breaking flights. World War II led to the development of new flight technologies, notably radio navigation, since celestial navigation was not suited for all-weather military operations. These forms of navigation were extended and enhanced when explorers began guiding spacecraft into space and across the solar system. Astronauts combined celestial navigation technology with radio transmissions. The development of the atomic clock revolutionized space flight because it could measure billionths of a second, thereby allowing mission teams to navigate more accurately. Scientists and engineers applied these technologies to navigation on earth to develop space-based time and navigation services such as GPS that is used every day by people from all walks of life.

» Have you read this book? We'd like to know what you think about it - write a review about Time And Navigation book by Andrew K. Johnston and you'll earn 50c in Boomerang Bucks loyalty dollars (you must be a Boomerang Books Account Holder - it's free to sign up and there are great benefits!)

A Preview for this title is currently not available.
More Books By Andrew K. Johnston
View All