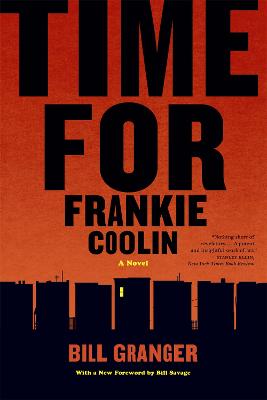 Known as much for his journalistic reporting as for the fiction he wrote under a variety of pen names, Bill Granger combined his divergent talents in his powerful novel Time for Frankie Coolin. With distinctive voices, compelling characters, on-the-ground observation, and suspense, it offers a serious, illuminating take on the changing tides of race, class, and politics in late twentieth-century Chicago.

Time for Frankie Coolin tells the story of a plasterer turned landlord in Chicago who, in the late 1970s, buys abandoned buildings and makes them just habitable enough that he can charge minimal rent to his mostly black tenants. Frankie?both a tough guy in the trades and a family man?has done well by his wife and kids, moving them to a house in the suburbs. But a casual favor for his wife's cousin?allowing the man to store some crates in an empty building?and a random act of arson set in motion a cascade of crises, including a menacing pair of G-men and the looming threat of prison if Frankie doesn't talk. But since talking has never been one of Frankie's strengths, he copes as he always has: by trying to tough it out on his own.

Calling to mind such gritty poets of the urban scene as George V. Higgins and Nelson Algren, Time for Frankie Coolin is both a psychological thriller and a '70s Chicago period piece that shines a surprisingly sympathetic light on the often ignored stories of the people who lived, worked, and died at the city's margins.

» Have you read this book? We'd like to know what you think about it - write a review about Time for Frankie Coolin book by Bill Granger and you'll earn 50c in Boomerang Bucks loyalty dollars (you must be a Boomerang Books Account Holder - it's free to sign up and there are great benefits!)

Bill Granger (1941-2012) was a Chicago journalist who wrote for the United Press International's Chicago bureau, the Chicago Tribune, and the Chicago Sun-Times, among others, and published more than twenty novels under the pseudonyms Joe Gash and Bill Griffith.

A Preview for this title is currently not available.
More Books By Bill Granger
View All