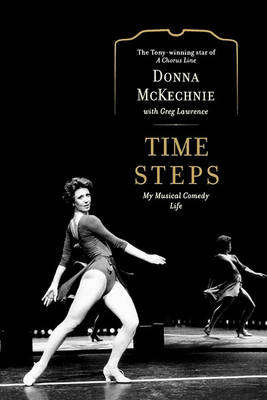 A poignant and revealing memoir from a legendary entertainer. Donna McKechnie began her love affair with dance as a child in Detroit. At fifteen, she ran away from home to join a touring dance troupe, and in 1961, she was cast in the Broadway smash hit How to Succeed in Business Without Really Trying. She soon won acclaim as Michael Bennett's show-stopping muse in Promises, Promises and Company. In 1975, with her Tony-winning performance in Michael Bennett's masterpiece, A Chorus Line, McKechnie vaulted to stardom as a unique Broadway "triple threat" who could do it all -- dance, sing, and act. Moving among the circles of artists, dancers, and musicians who inspired and challenged her in myriad ways, McKechnie writes about the trajectory of her career as it intertwined with and influenced her personal life and the lives of those around her. Recounting her dazzling career, McKechnie also reveals the dark side of fame: from her parents' troubled relationship to a searing account of her own marriage to Michael Bennett and her inspiring triumphs over depression and the rheumatoid arthritis that nearly ended her career. With affectionate reminiscences of Bob Fosse, Gwen Verdon, Stephen Sondheim, Fred Astaire, and many other well-known friends, McKechnie exhibits all the warmth, sensitivity, and verve that have endeared her to legions of fans over the years. Filled with behind-the-scenes stories and anecdotes, Time Steps is a candid, funny, and deeply personal memoir by a vivacious woman with an indomitable spirit and an illustrious, ongoing career.

» Have you read this book? We'd like to know what you think about it - write a review about Time Steps book by Donna McKechnie and you'll earn 50c in Boomerang Bucks loyalty dollars (you must be a Boomerang Books Account Holder - it's free to sign up and there are great benefits!)

Donna McKechnie is the legendary actress best known for her Tony Award-winning performance in A Chorus Line. She made her Broadway debut in 1961 with How to Succeed in Business Without Really Trying. Her other Broadway shows include Promises, Promises; Company; Sondheim: A Musical Tribute (which she also choreographed); On the Town; Sweet Charity (national tour); and State Fair, for which she won a Fred Astaire Award in 1996. Reviewing her recent one-woman show, My Musical Comedy Life, Ben Brantley wrote in the New York Times: "She remains the essence of the heroic drive that A Chorus Line celebrates." She lives in New York. Greg Lawrence is the author and coauthor of five books, including Dance with Demons: The Life of Jerome Robbins; the bestselling autobiography of Gelsey Kirkland, Dancing on My Grave; Colored Lights; and The Shape of Love.

A Preview for this title is currently not available.
More Books By Donna McKechnie
View All