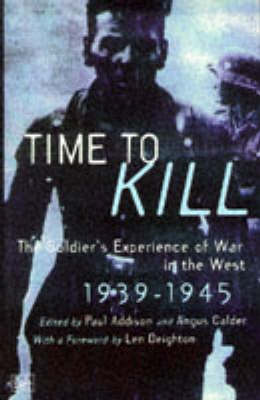 In the 50 years since the end of the Second World War, much has been written about the men at the top, but little attention has been given to what soldiering was like for the 'dog-face' and 'squaddy', the NCO's and junior officers. Redressing the balance, this original and powerful book explores the conditions in which the soldiers of many different countries lived and died, as well as their hopes and fears, and their experience of battle. John Erickson, John Keegan, Theodore Wilson and Omer Bartov are among the distinguished cast of historians whose subjects range from GIs in Europe to Indian troops in North Africa, and from the comic overtones of Dad's Army in Britain to the grim earnest of the war on the eastern front, where Russian woman fought as full combatants.

» Have you read this book? We'd like to know what you think about it - write a review about Time to Kill book by Paul Addison and you'll earn 50c in Boomerang Bucks loyalty dollars (you must be a Boomerang Books Account Holder - it's free to sign up and there are great benefits!)

Paul Addison (Author) Paul Addison teaches history at the University of Edinburgh and is a former visiting Fellow of All Soul's College, Oxford. He is the author of Now the War is Over, a social history of post-war Britain which accompanied an acclaimed BBC television series; and Churchill on the Home Front, described by David Cannadine in the Observer as 'the best one-volume study of Churchill yet available'.Angus Calder (Author) Angus Calder was an academic, writer, historian, educator and literary editor, and Reader in Cultural Studies and Staff Tutor in Arts with the Open University in Scotland. He read English at Cambridge and received his D. Phil from the School of Social Studies at the University of Sussex. He was Convener of the Scottish Poetry Library when it was founded in 1984. In 1970 he won the John Llewellyn Rhys prize for his seminal work, The People's War. His other books include Revolutionary Empire and The Myth of the Blitz. He died in 2008.