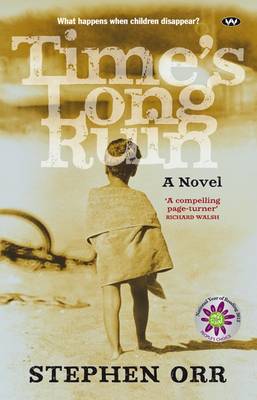 Nine-year-old Henry Page is a club-footed, deep-thinking loner, spending his summer holidays reading, roaming the melting streets of his suburb, playing with his best friend Janice and her younger brother and sister. Then one day Janice asks Henry to spend the day at the beach with them. He declines, a decision that will stay with him forever.

Time's Long Ruin is based loosely on the disappearance of the Beaumont children from Glenelg beach on Australia Day, 1966. It is a novel about friendship, love and loss; a story about those left behind, and how they carry on: the searching, the disappointments, the plans and dreams that are only ever put on hold.

'Stephen Orr is the custodian and celebrant of Adelaide's darkest mysteries - the great unsolved Somerton Man case, hidden pedophilia, The Don's business dealings, three children lost forever at the beach and everything that the ominous word "Snowtown" can connote. In Time's Long Ruin he has conjured up the suburban claustrophobia of the Fifties and added to it streaks of these darker pigments. His Thomas Street, Croydon - particularly on hot days, when no one has enough to do and everyone gets on each other's nerves - is Adelaide's very distinctive version of Winton's Cloudstreet, Malouf's Edmondstone Street and White's Sarsaparilla; but the quality and vividness of Orr's evocation of those stultifying times ensures he can hold his head high in such illustrious company. Time's Long Ruin is a compelling page-turner.' - Richard Walsh 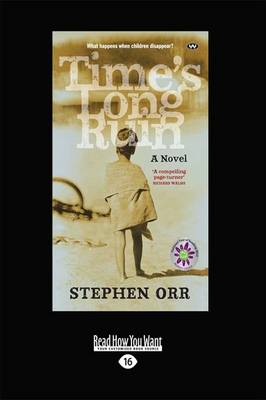 » Have you read this book? We'd like to know what you think about it - write a review about Time's Long Ruin book by Stephen Orr and you'll earn 50c in Boomerang Bucks loyalty dollars (you must be a Boomerang Books Account Holder - it's free to sign up and there are great benefits!)

“A few cars slowed, and heads turned and looked at the house, mouths flapping and fingers pointing out the poor kiddies’ house, looking so normal, like everyone else’s. They would have to find other ways of observing the Rileys’ suffering, of tasting their despair without swallowing it, of hearing and smelling and touching what they’d all known in imperceptibly small doses. 7A was a nightmare. A fairytale. A morality tale. A horror story with wilting agapanthus”

Time’s Long Ruin is the third novel by award-winning Australian author, Stephen Orr. During Adelaide’s oven-hot summer of 1960, nine-year-old Henry Page and his best friend (and next-door-neighbour) Janice Riley fill their days with hide-and-seek, cricket, reading, writing stories and visits to the beach. Janice’s younger siblings, seven-year-old Anna and four-year-old Gavin, are often part of the action. Home chores have to be done, and Henry likes to help out Con Pedavoli with the level-crossing gates and Doctor George Gunn with his library.

Henry idolises his dad, Detective Constable Bob Page: Bob and neighbour Bill Riley often discuss the mysterious case of the Somerton Man, and Henry listens in, sure his Dad will one day solve it. Then, on Australia Day, Henry decides not to go to the beach with his best friend and her siblings: the three never return, and life on Thomas Street, Croydon turns upside down.

Orr divides his tale into two parts: the first proceeds at a steady pace as Henry’s narration sets the scene; the second starts on the day the children go missing, and details the devastating effect that the disappearance of the three children has on the neighbourhood. Henry’s narrative is quite subjective: he often surmises what other players in the drama would have thought and said; in Part Two, he regularly talks to Janice, who visits him often to comment on events, but never reveals her true fate.

Considering his own age, Orr manages to convey the 1960 Adelaide summer with amazing accuracy. The moods, attitudes and common practices of the day are also expertly rendered. The unsolved disappearance of the Beaumont Children is quite obviously the basis of the story: the names, dates and locations are only slightly altered. Guilt and blame feature large in the story, but it also touches on depression, friendship and loyalty, the effect of mechanisation, grief, paedophilia and rough justice A powerful read.