A classic of animation education since it first published in 1981. For more than 25 years, copies of Timing for Animation have been sitting dog-eared and spine-split on desks and workstations around the world wherever animation is produced. All you need to breathe life into your animation is at your fingertips.

All the vital techniques employed by animators worldwide are explained using dozens of clear illustrations and simple, straightforward directions. Learn how animations should be arranged in relation to each other, how much space should be used and how long each drawing should be shown for maximum dramatic effect. Fully revised and updated, the second edition includes timing for digital production, digital storyboarding in 2D, digital storyboarding in 3D, the use of After Effects and much, much more!

Other Editions - Timing for Animation by John Halas 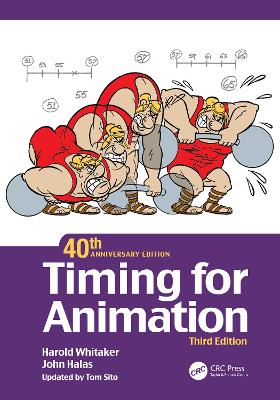 » Have you read this book? We'd like to know what you think about it - write a review about Timing for Animation book by John Halas and you'll earn 50c in Boomerang Bucks loyalty dollars (you must be a Boomerang Books Account Holder - it's free to sign up and there are great benefits!)

Known as the "father of animation" and formerly of Halas and Batchelor Animation unit, John produced over 2000 animations, including the legendary "Animal Farm" and the award winning "Dilemma". He was also the founder and president of the ASIFA and former Chairman of the British Federation of Film Societies. BAFTA-nominated professional animator and educator for 40 years, many of his students number among today's most outstanding animation artists. Tom Sito is an Adjunct Professor of Animation at USC, Woodbury College, and UCLA and has written numerous articles for Animation Magazine and Animation World Network. Tom's screen credits include the Disney classics THE LITTLE MERMAID (1989), BEAUTY & THE BEAST (1991), ALADDIN (1992), THE LION KING (1994), WHO FRAMED ROGER RABBITT (1988), POCAHONTAS (1995), FANTASIA (2000) and SHREK (2001). Tom is President-Emeritus of the Hollywood Animation Guild Local 839 IATSE. He is vice president of the International Animator's Society (ASIFA/Hollywood) He is a member of the Motion Picture Academy, the National Cartoonists Society and Hollywood Heritage. In 1998 he was named in Animation Magazine's list of the 100 Most Important People in Animation.

A Preview for this title is currently not available.
More Books By John Halas
View All