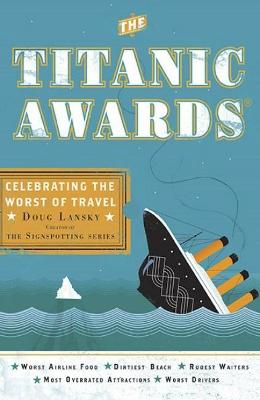 Celebrating the Worst of Travel

'In a nutshell, the Titanic Awards are the Darwin Awards for travel- only nobody dies.' -Los Angeles Times

Everyone who's ever checked (and lost) their luggage or discovered that their hotel misplaced their reservation knows there are few perfect vacations. The Titanic Awards takes a different approach to these often spectacular travel underachievements- celebrating them.

From worst airport layout to most confusing subway system to the most overrated tourist attraction, Lansky looks at these flawed travel destinations with a gimlet eye and a sense of the absurd.

» Have you read this book? We'd like to know what you think about it - write a review about Titanic Awards book by Doug Lansky and you'll earn 50c in Boomerang Bucks loyalty dollars (you must be a Boomerang Books Account Holder - it's free to sign up and there are great benefits!)

Doug Lansky, a writer and a traveler, has chronicled his travels around the world in his hilarious and vividly descriptive column, The Vagabond. His travels have included cruising up the Amazon on a cargo ship; living and blowgun hunting with Jaguar Indians in Peru; buying a horse and riding it to Colombia; hitchhiking through Syria and Jordan, where he befriended sergeants in the Iraqi military; riding a camel across the desert in India; and sailing down the Nile. Lansky's articles have appeared in Spy and Might magazines as well as in numerous major US daily newspapers. He is also the coauthor of How to Survive High School with Minimal Brain Damage, published when he was just sixteen years old.

A Preview for this title is currently not available.
More Books By Doug Lansky
View All