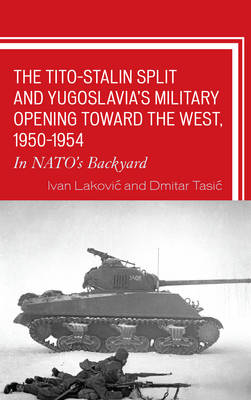 The Tito-Stalin Split and Yugoslavia's Military Opening toward the West, 1950-1954

Description - The Tito-Stalin Split and Yugoslavia's Military Opening toward the West, 1950-1954 by Ivan Lakovic

Yugoslav military cooperation with West emerged after the country's split with the U.S.S.R. and its allies in 1948. It came as a surprise for many, since Yugoslavia used to be one of the staunchest followers of Soviet politics. However, faced with possible military escalation of the ideological, political, and economic worsening of relations with the East, the Yugoslav leadership quickly turned to their former "class enemies." For the United States, it presented an opportunity to acquire many unexpected political benefits. Yugoslav alienation from the Kremlin provided territorial consolidation of the southern flank of NATO, denial of direct approach to the Adriatic Sea and Northern Italy to Soviet troops, and dealt a strong political blow to the homogeneity of the Eastern bloc. While not insisting on changing the ideological nature of Yugoslav state, the United States provided much needed material and financial aid, developing the base for entering into sphere of military cooperation. It had two main categories-direct support for Yugoslav forces through shipments of military equipment, as well as Yugoslavia entering into defensive, military alliance (the Balkan Pact) with Greece and Turkey, already full members of NATO. Such trends, aiming towards closer Yugoslav bonding with Western military and political structures, ended in the mid-1950s with Stalin's death, the outbreak of the Trieste crisis, and Tito's reconciliation with Soviet leadership. Developing the new policy of non-alignment with either of the confronting blocs, Yugoslavia stepped out from the program of Western military aid, while the Balkan Pact slowly faded in growing animosity between Greece and Turkey.

Book Reviews - The Tito-Stalin Split and Yugoslavia's Military Opening toward the West, 1950-1954 by Ivan Lakovic

» Have you read this book? We'd like to know what you think about it - write a review about Tito-Stalin Split and Yugoslavia's Military Opening toward the West, 1950-1954 book by Ivan Lakovic and you'll earn 50c in Boomerang Bucks loyalty dollars (you must be a Boomerang Books Account Holder - it's free to sign up and there are great benefits!)

Ivan Lakovic is research associate at the Historical Institute of the University of Montenegro. Dmitar Tasic is postdoctoral fellow at the Centre for War Studies of University College Dublin.