To a Mountain in Tibet

Description - To a Mountain in Tibet by Colin Thubron

Longlisted for the Dolman Travel Book of the Year - this is the doyen of travel writing at his elegiac and luminous best.

Mount Kailas is the most sacred of the world's mountains - holy to one fifth of humanity. Isolated beyond the central Himalayas, its summit has never been scaled, but for centuries the mountain has been ritually circled by Hindu and Buddhist pilgrims. Colin Thubron joins these pilgrims, after an arduous trek from Nepal, through the high passes of Tibet, to the magical lakes beneath the slopes of Kailas itself. He talks to secluded villagers and to monks in their decaying monasteries; he tells the stories of exiles and of eccentric explorers from the West. Yet, he is also walking on a pilgrimage of his own. Having recently witnessed the death of the last of his family, his trek around the great mountain awakes an inner landscape of love and grief, restoring precious fragments of his own past.

Buy To a Mountain in Tibet by Colin Thubron from Australia's Online Independent Bookstore, Boomerang Books.

Other Editions - To a Mountain in Tibet by Colin Thubron 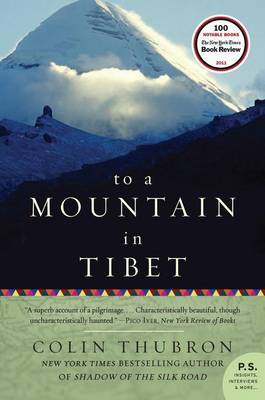 Book Reviews - To a Mountain in Tibet by Colin Thubron

» Have you read this book? We'd like to know what you think about it - write a review about To a Mountain in Tibet book by Colin Thubron and you'll earn 50c in Boomerang Bucks loyalty dollars (you must be a Boomerang Books Account Holder - it's free to sign up and there are great benefits!)

Colin Thubron is an acknowledged master of travel writing, and the winner of many prizes and awards. His first writing was about the Middle East - Damascus, Lebanon and Cyprus. In 1982 he travelled into the Soviet Union in an ancient Morris Marina, pursued by the KGB, a journey he recorded in Among the Russians. From these early experiences developed his classic travel books- Behind the Wall (winner of the Hawthornden Prize and the Thomas Cook Travel Award), The Lost Heart of Asia, In Siberia (Prix Bouvier) and Shadow of the Silk Road (all available in Vintage). In 2010 Colin Thubron became President the Royal Society of Literature.

A Preview for this title is currently not available.
More Books By Colin Thubron
View All