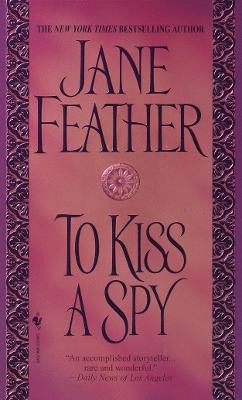 To Kiss A Spy

Description - To Kiss A Spy by Jane Feather

New York Times bestselling author Jane Feather has won legions of fans and critical accolades for her sweeping romances portraying a unique blend of sizzling seduction and dangerous intrigue. In this first of two romances featuring two unconventional sisters whose quest to solve the mystery surrounding their lives puts each of them in the path of a dangerously irresistible hero, Jane Feather tells the story of a daring young widow and a master spy engaged in a duel of wits--and seduction--to uncover a dark secret....

To Kiss a Spy

Lady Pen Bryantson had been caught red-handed looking for clues among her mother-in-law's papers. But the mystery she sought to uncover only deepened with the sudden appearance of a man whose mere presence sent shivers of excitement coursing through her. What could this dangerously seductive man who moved with a courtier's charm and brandished an assassin's skill want with someone as ordinary as she was?

But to Owen D'Arcy, the bewitching young woman he'd been assigned to ensnare was anything but ordinary. With a single kiss, the sophisticated spy found that he'd been unexpectedly disarmed. Determined to seduce her on his own terms, Owen offered Pen a devil's bargain she had no choice but to accept. Now they would both go undercover, only to find themselves drawn into a world of deception and double cross, where anyone could be the deadliest of enemies--and their own uncontrolled passion the most dangerous threat of all.


Book Reviews - To Kiss A Spy by Jane Feather

» Have you read this book? We'd like to know what you think about it - write a review about To Kiss A Spy book by Jane Feather and you'll earn 50c in Boomerang Bucks loyalty dollars (you must be a Boomerang Books Account Holder - it's free to sign up and there are great benefits!)

Jane Feather is the New York Times bestselling, award-winning author of To Kiss a Spy, The Widow's Kiss, The Least Likely Bride, The Accidental Bride, The Hostage Bride, A Valentine Wedding, The Emerald Swan, and many other historical romances. She was born in Cairo, Eygpt and grew up in New Forest, in the south of England. She began her writing career after she and her family moved to Washington D.C., in 1981. She now has over six million copies of her books in print.

A Preview for this title is currently not available.
More Books By Jane Feather
View All