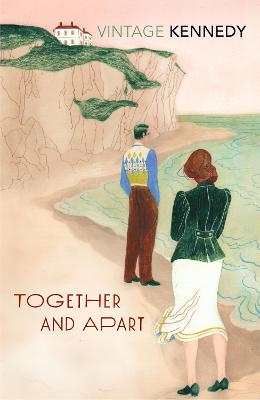 Description - Together and Apart by Margaret Kennedy

Betsy Canning is dissatisfied with life. She has always taken pains to be healthy, popular and well-treated, but despite her wealth, her comfortable homes and beautiful children, happiness eludes her. The problem must lie, she thinks, in her marriage to Alec, and a neat, civilised divorce seems the perfect solution.But talk of divorce sparks interference from family and friends, and soon public opinion tears into the fragile fabric of family life and private desire. Alec and Betsy's marriage will not be the only casualty, and in this newly complicated world, happiness is more elusive than ever.

Book Reviews - Together and Apart by Margaret Kennedy

» Have you read this book? We'd like to know what you think about it - write a review about Together and Apart book by Margaret Kennedy and you'll earn 50c in Boomerang Bucks loyalty dollars (you must be a Boomerang Books Account Holder - it's free to sign up and there are great benefits!)

Margaret Kennedy was born in London on 23 April 1896, the eldest of four children. She attended Cheltenham Ladies College, then went on to study history at Somerville College, Oxford. Her first book, a commissioned work of history, was published in 1922 and was soon followed by her first work of fiction, The Ladies of Lyndon (1923). Her second novel, The Constant Nymph (1924), became a worldwide bestseller, and with it Kennedy became a well-known and highly praised writer. The following year she married David Davies, a barrister; they lived in London and had three children. Kennedy went on to write fifteen further novels, many of which were critically commended Troy Chimneys (1953) was awarded the James Tait Black Memorial Prize. She also wrote plays, adapting both The Constant Nymph and its sequel The Fool of the Family very successfully. The former opened in the West End in 1926, starring Noel Coward followed by John Gielgud, to great acclaim. Three different film versions of The Constant Nymph, featuring stars of the time such as Ivor Novello and Joan Fontaine, were equally popular, and led to Kennedy s engagement in film work for a