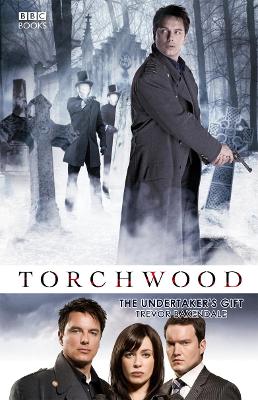 The Hokrala Corp lawyers are back. They're suing planet Earth for mishandling the twenty-first century, and they won't tolerate any efforts to repel them. An assassin has been sent to remove Captain Jack Harkness.It's been a busy week in Cardiff. The Hub's latest guest is a translucent, amber jelly carrying a lethal electrical charge. Record numbers of aliens have been coming through the Rift, and Torchwood could do without any more problems.But there are reports of an extraordinary funeral cortege in the night-time city, with mysterious pallbearers guarding a rotting cadaver that simply doesn't want to be buried.Torchwood should be ready for anything - but with Jack the target of an invisible killer, Gwen trapped in a forgotten crypt and Ianto Jones falling desperately ill, could a world of suffering be the Undertaker's gift to planet Earth?Featuring Captain Jack Harkness as played by John Barrowman, with Gwen Cooper and Ianto Jones as played by Eve Myles and Gareth David-Lloyd, in the hit science fiction series created by Russell T Davies for BBC Television.

» Have you read this book? We'd like to know what you think about it - write a review about Torchwood: The Undertaker's Gift book by Trevor Baxendale and you'll earn 50c in Boomerang Bucks loyalty dollars (you must be a Boomerang Books Account Holder - it's free to sign up and there are great benefits!)

Trevor Baxendale was born in Liverpool in 1966. He has been contributing to a variety of Doctor Who fiction ranges for both BBC Books and Big Finish Productions for the last ten years and is the author of the award-winning 2004 BBC novel The Deadstone Memorial. He is a regular contributor to BBC Magazines' hugely popular Doctor Who Adventures, scripting the further exploits of the Doctor in comic strip form. His first Torchwood novel, Something in the Water, was published in March 2008 and was a national bestseller.

A Preview for this title is currently not available.
More Books By Trevor Baxendale
View All