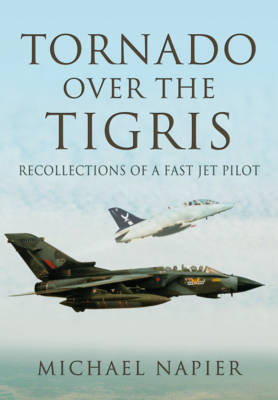 Tornado Over the Tigris

Recollections of a Fast Jet Pilot

Description - Tornado Over the Tigris by Michael John W. Napier

Written from the unique perspective of a fast jet cockpit, Tornado Over the Tigris captures the essence of what it was really like to fly a Tornado at the front-line of the Cold War in Germany and on operations over Iraq in the aftermath of the Gulf War. After achieving a boyhood ambition to qualify as an RAF pilot, Michael Napier was posted to RAF Bruggen in Germany where he spent five years flying Tornado GR1 strike/attack aircraft at the height of the Cold War. Always exhilarating, sometimes amusing and often dangerous, Michael Napier's Tornado flying ranged from 'routine' low-flying in continental Europe and the UK, to air combat manoeuvring in Sardinia and the ultra-realistic Red Flag exercises in the USA. Progressing from struggling first-tourist to respected four-ship leader, he then became an instructor at the Tactical Weapons Unit at RAF Chivenor. This tour, during which he flew the Hawk, provided yet more exciting and challenging flying. He returned to the Tornado at Bruggen as a Flight Commander shortly after the Gulf War and subsequently flew a number of operational sorties over Iraq, which included leading air-strikes against Iraqi air defence installations as part of major Coalition operations. This is his story, told with ease and great style. It is sure to inspire a fresh generation of fast jet pilots as they strive to make their own marks in this field. AUTHOR: The elder son of an army officer, Michael Napier joined the RAF in 1978 and served with 14 Squadron as a Tornado pilot in the late 1980s and again in the early 1990s. These two tours engendered a deep interest in 14 Squadron's distinguished history. He was appointed as Honorary Secretary of the 14 Squadron Association in 2003 and since then has carried out extensive research into the Squadron's heritage. SELLING POINTS: Offers a wealth of first-hand insights into the reality of front-line deployment during some of the more dynamic aerial engagements of the latter half of the twentieth century. Tales from the cockpit of the Tornado and Hawk provide an authentic impression of what it was actually like to fly these iconic aircraft types. Black and white illustrations integrated throughout

» Have you read this book? We'd like to know what you think about it - write a review about Tornado Over the Tigris book by Michael John W. Napier and you'll earn 50c in Boomerang Bucks loyalty dollars (you must be a Boomerang Books Account Holder - it's free to sign up and there are great benefits!)

The elder son of an army officer, Michael Napier was educated at Ellesmere College and learned to fly in 1977. He joined the RAF the following year and, after qualifying as a fast jet pilot, he flew Tornados from RAF Bruggen and Hawks from RAF Chivenor. His military flying career encompassed both the Cold War and operations over Iraq after the Gulf War. Michael, who is now an airline captain, lives in the Cotswolds.

A Preview for this title is currently not available.
More Books By Michael John W. Napier
View All