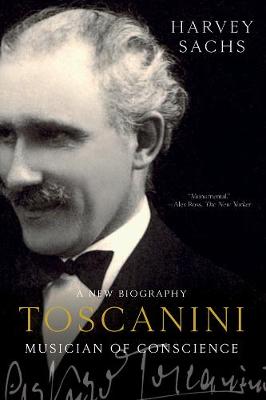 Harvey Sachs's "monumental" (Alex Ross) biography recounts the sixty-eight-year career of conductor Arturo Toscanini (1867-1957), an artist celebrated for his fierce dedication, photographic memory, explosive temper, impassioned performances, and uncompromising work ethic. Toscanini collaborated with Verdi, Puccini, Debussy, and Richard Strauss; undertook major reforms at La Scala and the Metropolitan Opera; and eventually pioneered the radio and television broadcasts of the NBC Symphony. His monumental achievements inspired generations, while his opposition to Nazism and fascism made him a model for artists of conscience. In this "persuasive and compelling" new biography, Sachs illuminates the "crucial the central role Toscanini played in our musical culture for well over 60 years" (New York Times Book Review). Set against the roiling currents of twentieth-century Europe and the Americas, Toscanini is a "necessary" portrait of this "complex, flawed, but noble human being and towering artist" (Wall Street Journal) whose peerless influence reverberates today.

Other Editions - Toscanini: Musician of Conscience by Harvey Sachs » Have you read this book? We'd like to know what you think about it - write a review about Toscanini: Musician of Conscience book by Harvey Sachs and you'll earn 50c in Boomerang Bucks loyalty dollars (you must be a Boomerang Books Account Holder - it's free to sign up and there are great benefits!)


A Preview for this title is currently not available.
More Books By Harvey Sachs
View All