Total Destruction of the Tamil Tigers

In 2009 the Sri Lankan government forces literally eradicated the Tamil Tiger insurgency after 26 years of civil war. This was the first time that a government had defeated an indigenous insurgency by force of arms. It was as if the British army killed thousands of IRA cadres to end the war in Northern Ireland. The story of this war is fascinating in itself, besides the international repercussions for 'terrorism' and insurgency worldwide. Many countries involved themselves in the war to arm the combatants (China, Pakistan, India, North Korea) or to bring peace (US, France, UK, Norway). While researching this work Professor Moorcraft was given unprecedented access to Sri Lankan politicians (including the President and his brother, the Defence Permanent Secretary), senior generals, intelligence chiefs, civil servants, UN officials, foreign diplomats and NGOs. He also interviewed the surviving leader of the Tamil Tigers. His conclusions and findings will be controversial. He reveals how the media and foreign mediators were frustrated by the authorities determined to stamp out Tamil Tiger resistance by whatever means. Their methods, which have led to accusations of war crimes, were brutally effective but are likely to remain highly contentions for years to come. ILLUSTRATIONS: 16 pp b/w plates

Other Editions - Total Destruction of the Tamil Tigers by Paul L. Moorcraft 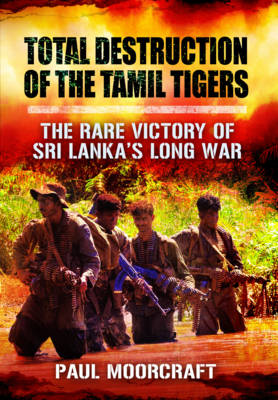 » Have you read this book? We'd like to know what you think about it - write a review about Total Destruction of the Tamil Tigers book by Paul L. Moorcraft and you'll earn 50c in Boomerang Bucks loyalty dollars (you must be a Boomerang Books Account Holder - it's free to sign up and there are great benefits!)

Professor Paul Moorcraft has frontline experience reporting on over 20 wars, form Zimbabwe to Afghanistan, as a correspondent for print, radio and TV for nearly 40 years. He is currently Visiting Professor at Cardiff University and Director of the Centre for Foreign Policy Analysis, London. Two of his published works are in print with Pen and Sword - The Rhodesian War and Mugabe's War Machine.

A Preview for this title is currently not available.
More Books By Paul L. Moorcraft
View All