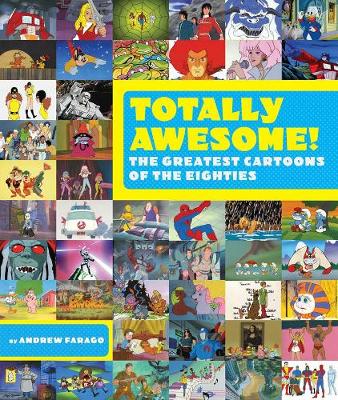 Totally Awesome: The Greatest Cartoons of the Eighties is the ultimate guide to '80s cartoon nostalgia, featuring the art, toys, and inside story behind icons like He-Man, the Teenage Mutant Ninja Turtles, G.I. Joe, and the Thundercats.

For an entire generation of kids weaned on the intoxicating excitement of eighties cartoons, the decade can be summed up with two words: Totally Awesome!

With a thriving Saturday morning network schedule, a full complement of weekday syndicated programming, and the removal of guidelines that prevented cartoons from being based on toys, the 1980s enjoyed an unprecedented TV animation boom that made household names of a host of colorful characters.

From He-Man and the Masters of the Universe to The Transformers, G.I. Joe, and The Muppet Babies, eighties cartoons would have such a huge impact on an entire generation that decades later they have become pop culture touchstones, revered by fans whose young minds were blown by their vivid visuals and snappy storytelling.

In this deluxe book, Andrew Farago, a respected cartoon historian and child of the eighties, provides an inside look at the history of the most popular cartoons of the decade, as told by the writers, animators, voice actors, and other creative talents who brought life to some of the era's most enduring animated shows.

Also featuring Thundercats, Inspector Gadget, Teenage Mutant Ninja Turtles, and many more cartoon classics, Totally Awesome is a treasure trove of eighties animation nostalgia that will take fans back to a time of unlimited imagination and unparalleled adventure.

» Have you read this book? We'd like to know what you think about it - write a review about Totally Awesome book by Andrew Farago and you'll earn 50c in Boomerang Bucks loyalty dollars (you must be a Boomerang Books Account Holder - it's free to sign up and there are great benefits!)

Andrew Farago is the curator of San Francisco's Cartoon Art Museum. He is the author of The Looney Tunes Treasury and the Harvey Award-winning Teenage Mutant Ninja Turtles: The Ultimate Visual History, and his upcoming books include The Complete Peanuts Character Encyclopedia. Farago received the prestigious Inkpot Award from Comic-Con International in 2015. He lives in Berkeley with his wife, cartoonist Shaenon K. Garrity, and their son, Robin. The versatile actress Russi Taylor provided the voices for Huey, Dewey, Louis, and Webby Vanderquack in the DuckTales TV series, and Baby Gonzo in Disney's Muppet Babies. She has also been the voice of Minnie Mouse since 1986. During the eighties, she was the original voice of Strawberry Shortcake in six TV specials, and Pebbles Flintstone in The Flintstones Comedy Show. Other high-profile roles include Nurse Mouse in The Rescuers Down Under, Pac-Baby in the Pac-Man TV series, Melissa in Pound Puppies, Queen Rosedust in My Little Pony, Duchess in Babe, and Drizella and the Fairy Godmother in the animated Cinderella sequels. You can also hear her voice on The Simpsons, as Martin Prince, the twins Sherri and Terri, and German exchange student Ã¯Â¿Â½ter. She was nominated for an Emmy for her role as Ferny Toro on the PBS series, Jakers! The Adventures of Piggley Winks. She and her husband (the late Wayne Allwine, who voiced Mickey Mouse) were named Disney Legends in 2008. Taylor lives in Los Angeles, California.

A Preview for this title is currently not available.
More Books By Andrew Farago
View All