It's spring of their fifth-grade year and Rip and Red have a thrilling opportunity to participate in a weekend basketball tournament with a few other members of Clifton United. While the tournament is only a short bus ride away, both boys will travel outside their comfort zones.

Ultra-competitive Rip must play on a team with kids he doesn't like. But he faces an even bigger hurdle when someone from his past returns, someone he hasn't seen in years, someone who just may derail the entire weekend.

As for Red, because of his autism spectrum disorder, he's never travelled anywhere without his mother. Will he muster the courage to take the trip? Fortunately for both boys, also on the team is an unlikely addition, a source of inspiration who helps everyone discover the true meaning of the word champion.

Other Editions - Tournament of Champions by Phil Bildner 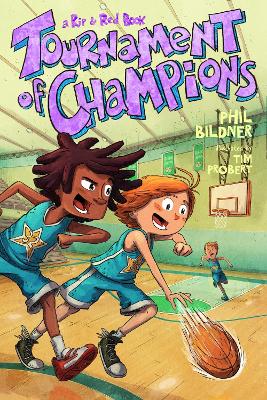 » Have you read this book? We'd like to know what you think about it - write a review about Tournament of Champions book by Phil Bildner and you'll earn 50c in Boomerang Bucks loyalty dollars (you must be a Boomerang Books Account Holder - it's free to sign up and there are great benefits!)

Phil Bildner is a former New York City public school teacher who lives in Newburgh, New York. The author of many books, including Marvelous Cornelius: Hurricane Katrina and the Spirit of New Orleans and The Soccer Fence: A Story of Friendship, Hope, and Apartheid in South Africa, Phil is a frequent speaker at conferences and travels to over sixty schools a year. Tim Probert has illustrated children's books, including Pickle by Kim Baker, as well as magazines and advertisements. He is also a director at the animation studio Aardman Nathan Love. He lives in New York City.

A Preview for this title is currently not available.
More Books By Phil Bildner
View All