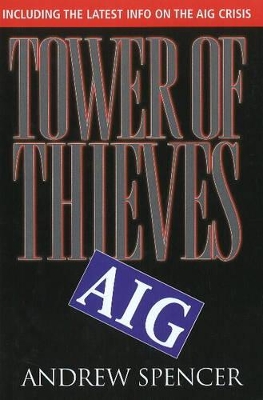 Inside AIG's Culture of Corporate Greed

This is a true story of personal greed and downfall, corporate greed fuelled with economic and social treachery, shareholder waste and discrimination at AIG, 70 Pine Street in the heart of the financial district. This address is know as the AIG Tower, hence the working title -- TOWER OF THIEVES -- the central character is a man with a wife, a family, who has cheated his way to the top BY DOING GOOD. He is responsible for leading a 60 billion dollar organisation with over 40,000 employees world-wide at one of the largest companies in the world. What he sees and what he does validates what unchecked power on Wall Street will do to a man and what it has done to an entire company and country. The events at AIG lead right to the CEO and Senior Vice Chairman and how our guy fights an entire corrupt organisation and how he became one of those he despised. "We found each other pretty easily -- he recognised me from a photo that had appeared in the local paper about the book I was writing about Bear Stearns -- and he asked if we could go 'somewhere more private' to talk. Part of me thought this was ridiculous. A big part of me, in fact.
All this cloak-and-dagger nonsense seemed out of place in early summer Nantucket, Massachusetts, of all places. But there was some little sliver inside that told me this could be good. So I went along with it. We went to a park, sat down and, once we had gotten through the formalities about how the Bear book was going, we got down to business. 'I should tell you that I'm going to federal prison at the end of the year', he began. "In my admittedly limited experience with such introductions, I have to say that any time a conversation starts with someone's announcing their impending sentencing date, fasten your seatbelt, because the story that follows is usually related to the sentencing date itself and is also usually pretty interesting. I took notes as John rolled out his story, the same story you're about to read here. After about five minutes, though, I realised I was no longer writing. I was just listening in disbelief to what he was telling me. Half an hour later, I was back at my computer, writing the last couple of chapters of "Bear Trap", already looking ahead to what we were calling 'the AIG book'.
This meeting took place long before AIG was the poster child for corporate greed and chutzpah. For that matter, this was before a lot of people had ever even heard of AIG, and even fewer people knew what they did as a corporation". This is a story of what our taxpayer dollars have purchased.

» Have you read this book? We'd like to know what you think about it - write a review about Tower of Thieves book by Andrew Spencer and you'll earn 50c in Boomerang Bucks loyalty dollars (you must be a Boomerang Books Account Holder - it's free to sign up and there are great benefits!)

Andrew Spencer is Vice President of Communications and Director of the CMG Image Marketing and Literary divisions.

A Preview for this title is currently not available.
More Books By Andrew Spencer
View All

A+ National Pre-apprenticeship Maths and Literacy for Electrical
$29.35 $29.95

A+ National Pre-accreditation Maths and Literacy for Business Admin
$29.35 $29.95

A+ Pre-apprenticeship Maths and Literacy for General Construction
$29.35 $29.95