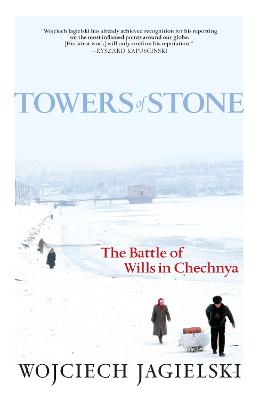 The Battle of Wills in Chechnya

Award-winning Polish reporter Jagielski brings into focus the tragedy of Chechnya and the war being waged there by small groups of desperate warriors against the powerful Russian army. Jagielski's narrative revolves around two Chechnyan leaders - Shamil Basayev and Aslan Maskhadov. Caught up in a war to which they owe everything and without which they could not live, the two fighters face enemy forces in various conflicts. A bitter history of the region told with forceful clarity.

» Have you read this book? We'd like to know what you think about it - write a review about Towers Of Stone book by Wojciech Jagielski and you'll earn 50c in Boomerang Bucks loyalty dollars (you must be a Boomerang Books Account Holder - it's free to sign up and there are great benefits!)

Formerly a reporter at Gazeta Wyborcza, Poland s first and biggest independent daily, WOJCIECH JAGIELSKIhas been witness to some of the most important political events of the end of the twentieth century. He is the recipient of several of Poland s most prestigious awards for journalism, including a "Bene Merito" honorary decoration from the Polish government and the Dariusz Fikus award for excellence in journalism. Seen by many as the literary heir to Ryszard Kapu ci ski, he is the author of several books of in-depth reportage, including "Towers of Stone: The Battle of Wills in Chechnya," which won Italy s "Letterature dal Fronte Award." Arguably Poland s best-known contemporary non-fiction writer, Jagielski lives outside Warsaw."

A Preview for this title is currently not available.
More Books By Wojciech Jagielski
View All