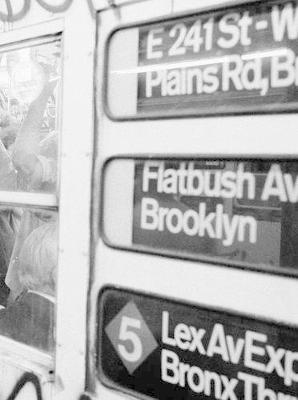 Brian Young took the pictures in The Train NYC, 1984, the year he moved to New York, when the city was recovering from an economic depression that began in the mid-1970s but whose eff ects were still quite visible. The loss of manufacturing followed by loss of population to suburbs led to large-scale urban decay and a decline in social services. Abandoned shells of burnt-out cars littered roadways, and muggings were a fact of daily life. The beginnings of the crack cocaine epidemic, with its coincident escalating crime, created an atmosphere of citywide malaise. Graffiti exploded and spread across the city landscape, in particular on the subway system. Although considered vandalism, graffiti's proliferation can be thought of as an act of social protest, an outcry for relief and reform, or a platform for the dispossessed. It was a bleak time; it was Gotham.

» Have you read this book? We'd like to know what you think about it - write a review about Train NYC, 1984 book by Brian Young and you'll earn 50c in Boomerang Bucks loyalty dollars (you must be a Boomerang Books Account Holder - it's free to sign up and there are great benefits!)

After moving to New York in 1984 to attend classes the International Center for Photography, he began assisting Eugene Richards in the processing and printing production of materials for publication of the book Below The Line: Living Poor in America (1987). In addition to being a master printer, Brian Young has taught black-and-white photography at International Center of Photography, New York, since 1988 and has taught workshops in numerous countries, including Brazil, Mexico and Spain. He continues to collaborate with prominent analogue photographers who believe in the unique beauty of film and the gelatin silver print.

A Preview for this title is currently not available.
More Books By Brian Young
View All