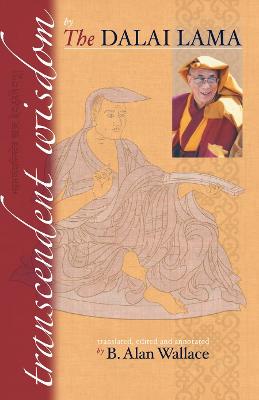 "This extraordinarily clear exposition on the wisdom section of the Guide to the Bodhisattva's Way of Life is based on an oral teaching given in Switzerland by HH the Dalai Lama before an audience of thousands of Tibetans and Westerners in 1979. Shantideva's Guide to the Bodhisattva's Way of Life is one of the most important texts in the Mahayana tradition of Buddhist practice. Its ninth chapter ,the section on transcendent wisdom, is known among Buddhist scholars as a challenging exposition of Madhyamika philosophy and difficult to understand without a commentary. This invaluable volume with its precise elucidation of core issues of Tibetan Buddhism stands as a key work in Buddhist literature."

» Have you read this book? We'd like to know what you think about it - write a review about Transcendent Wisdom book by Dalai Lama and you'll earn 50c in Boomerang Bucks loyalty dollars (you must be a Boomerang Books Account Holder - it's free to sign up and there are great benefits!)

His Holiness the Fourteenth Dalai Lama is considered the foremost Buddhist leader of our time. The exiled spiritual head of the Tibetan people, he is a Nobel Peace Laureate, a Congressional Gold Medal recipient, and a remarkable teacher and scholar who has authored over one hundred books.

A Preview for this title is currently not available.
More Books By Dalai Lama
View All

Kindness, Clarity, and Insight: The Fundamentals of Buddhist Thought and Practice
$37.36 $41.51

Healing Emotions: Conversations with the Dalai Lama on Psychology, Meditation, and the Mind-Body Connection
$43.97 $48.86