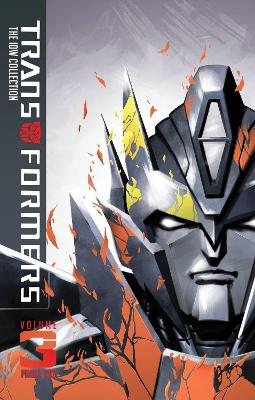 The Lost Light finally reaches the Crystal City while Orion Pax follows a rogue group of Decepticons. Meahwhile, back on Cybertron, violence breaks out in the heart of the city and Prowl looks for someone to blame! Collects "More Than Meets The Eye" #9-13 and the 2012 Annual, "Robots in Disguise" #9-11 and the 2012 Annual, plus the Thundercracker, Bumblebee, and Megatron Spotlight issues.

» Have you read this book? We'd like to know what you think about it - write a review about Transformers Idw Collection Phase Two Volume 3 book by James Roberts and you'll earn 50c in Boomerang Bucks loyalty dollars (you must be a Boomerang Books Account Holder - it's free to sign up and there are great benefits!)

John Barber is a former Marvel and IDW Publishing editor now focused on writing comics. Credits include: Optimus Prime, Doctor Strange/Punisher, Ultimate Spider-Man Infinite Comics, Revolutionaries, Back to the Future, and Action Man comics! Nick Roche is an Irish comic book artist and writer who hails from Dublin. He's best known for his extensive credits on IDW's Transformers titles, the most prominent of which are Transformers: Sins of the Wreckers, Transformers: Last Stand of the Wreckers, and numerous covers for Transformers: More Than Meets the Eye, to which he also contributed stories and interior art. Nick has also worked on IDW's Doctor Who series and the creator-owned, all-ages horror comedy Monster Motors, with Minions screenwriter Brian Lynch. Beyond IDW, he's worked on New Warriors for Marvel and serves as the album artist and music video designer for rock band The Darkness.