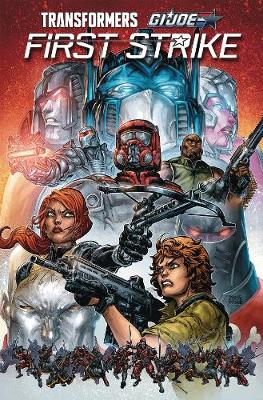 As Earth joins the intergalactic community, a massive explosion threatens the peace! A new COBRA--led by the worst villains to ever tangle with G.I. Joe, M.A.S.K., and the Transformers--is invading Cybertron, and only Scarlett, Optimus Prime, the Joes, and the Autobots can save two worlds!

Featuring characters from Transformers, G.I. Joe, M.A.S.K., Micronauts, Rom, Action Man and more! It's a race to the finish as good fights evil for the fate of two worlds! Will our heroes win, or will Cobra DESTROY ALL TRANSFORMERS?!? 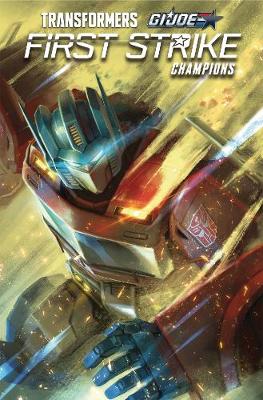 » Have you read this book? We'd like to know what you think about it - write a review about Transformers/G.I. JOE: First Strike book by Mairghread Scott and you'll earn 50c in Boomerang Bucks loyalty dollars (you must be a Boomerang Books Account Holder - it's free to sign up and there are great benefits!)

Mairghread Scott grew up in Dearborn, Michigan, a suburb of Detroit, and was raised on a healthy diet of Shakespeare, Monty Python, and three iterations of Star Trek. After college, Mairghread worked her way up as an assistant while writing plays and honing her talents. Then she landed a job as a Script Coordinator for TransformersPrime and G.I. Joe Renegades. Mairghread got her first opportunity to join a writer's room there and it led to her first professional script, "Stronger, Faster." Since then, she has written for many different TV shows and comic books as a freelance writer and story consultant. She has had the joy of helping to create the first fan-built transformer, Windblade, and bring her to life in the IDW comics series of the same name, as well as writing Windblade's introduction to the new animated series Transformers Robots in Disguise.

A Preview for this title is currently not available.
More Books By Mairghread Scott
View All

Transformers Windblade The Last City
No Stock on Hand, Supplier Has No Due Date for Supply.
$38.69 $42.99