The Inside Story of the Sustainable Development Goals

Transforming Multilateral Diplomacy provides the inside view of the negotiations that produced the UN Sustainable Development Goals, which will guide UN environment and development policy through 2030. Not only did this process mark a sea change in how the United Nations conducts multilateral diplomacy, it changed the way that the UN does its business. This book tells the story of the people, issues, negotiations, and paradigm shifts that unfolded through thirteen sessions of the Open Working Group on Sustainable Development Goals and the subsequent seven sessions of negotiations on the post-2015 development agenda, from the unique point of view of Co-Chair of the Open Working Group and Co-Facilitator of the Post-2015 Development Agenda, Kenyan Ambassador Macharia Kamau, and other key participants from governments, the UN Secretariat, and civil society. The historic nature of the Sustainable Development Goals and their negotiation make this story a must-read for anyone interested in multilateral negotiations, diplomacy, the environment, sustainable development, or the United Nations. 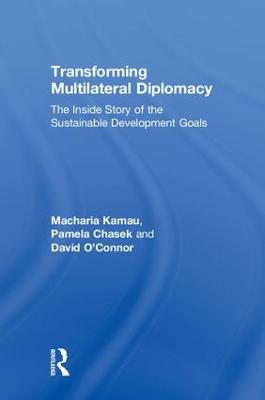 » Have you read this book? We'd like to know what you think about it - write a review about Transforming Multilateral Diplomacy book by Macharia Kamau and you'll earn 50c in Boomerang Bucks loyalty dollars (you must be a Boomerang Books Account Holder - it's free to sign up and there are great benefits!)

Macharia Kamau, as Ambassador and Permanent Representative of Kenya to the UN, served as Co-Chair of the OWG on the SDGs and the Co-Facilitator of the Intergovernmental Negotiations on the 2030 Sustainable Development Agenda. In 2014 he was awarded the Gold Medal Award for Environmental Diplomacy from the International Council of Environmental Law and the International Union for Conservation of Nature. Pamela Chasek is professor of political science at Manhattan College. She is the executive editor of the Earth Negotiations Bulletin, a reporting service on UN environment and development negotiations, and she reported from every meeting of the OWG on SDGs. She is the author and editor of Global Environmental Politics, The Roads from Rio, The Global Environment in the 21st Century, and Earth Negotiations. David O'Connor served, from 2003 to 2015, as Chief of the Policy and Analysis Branch, Division for Sustainable Development, Department of Economic and Social Affairs, UN where he led a team of policy researchers who provided the analytical direction and substanceto the UN's work on sustainable development, supporting the Open Working Group on the Sustainable Development Goals.

A Preview for this title is currently not available.
More Books By Macharia Kamau
View All