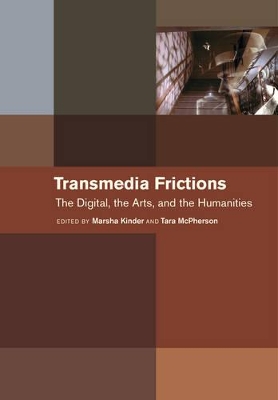 The Digital, the Arts, and the Humanities

Editors Marsha Kinder and Tara McPherson present an authoritative collection of essays on the continuing debates over medium specificity and the politics of the digital arts. Comparing the term ?transmedia? with ?transnational,? they show that the movement beyond specific media or nations does not invalidate those entities but makes us look more closely at the cultural specificity of each combination. In two parts, the book stages debates across essays, creating dialogues that give different narrative accounts of what is historically and ideologically at stake in medium specificity and digital politics. Each part includes a substantive introduction by one of the editors.

An invaluable reference work in the field of visual media studies, Transmedia Frictions provides sound historical perspective on the social and political aspects of the interactive digital arts, demonstrating that they are never neutral or innocent.

» Have you read this book? We'd like to know what you think about it - write a review about Transmedia Frictions book by Marsha Kinder and you'll earn 50c in Boomerang Bucks loyalty dollars (you must be a Boomerang Books Account Holder - it's free to sign up and there are great benefits!)

Marsha Kinder is an Emerita University Professor of Critical Studies at University of Southern California's School of Cinematic Arts and the author of many books, including Playing with Power and Blood Cinema. Since 1997, she has directed The Labyrinth Project, an art collective and research initiative on database narrative, which has produced twelve interactive projects (DVDs, websites, and installations). Her latest online project is interactingwithautism.com. She is also a longtime member of the Editorial Board of Film Quarterly and is currently working on a book titled Database Narrative in the Light of Neuroscience. Tara McPherson is Associate Professor at the University of Southern California's School of Cinematic Arts; author of the Cawelti Award--winning Reconstructing Dixie; editor of Digital Youth, Innovation, and the Unexpected; coeditor of Hop on Pop: The Politics and Pleasures of Popular Culture; a founding editor of both the International Journal of Learning and Media and of the online media journal Vectors. She is the Lead Investigator of the Alliance for Networking Visual Culture and is completing Designing for Difference, based upon ten years of digital production collaborations.

A Preview for this title is currently not available.
More Books By Marsha Kinder
View All