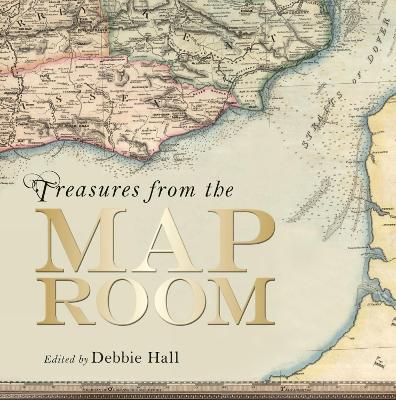 Treasures from the Map Room

A Journey through the Bodleian Collections

Description - Treasures from the Map Room by Debbie Hall

This book explores the stories behind seventy-five extraordinary maps. It includes unique treasures such as the fourteenth-century Gough Map of Great Britain, exquisite portolan charts made in the fifteenth century, the Selden Map of China - the earliest example of Chinese merchant cartography - and an early world map from the medieval Islamic Book of Curiosities, together with more recent examples of fictional places drawn in the twentieth century, such as C.S. Lewis's own map of Narnia and J.R.R. Tolkien's map of Middle Earth. As well as the works of famous mapmakers Mercator, Ortelius, Blaeu, Saxton and Speed, the book also includes lesser known but historically significant works: early maps of the Moon, of the transit of Venus, hand-drawn estate plans and early European maps of the New World. There are also some surprising examples: escape maps printed on silk and carried by pilots in the Second World War in case of capture on enemy territory; the first geological survey of the British Isles showing what lies beneath our feet; a sixteenth-century woven tapestry map of Worcestershire; a map plotting outbreaks of cholera and a jigsaw map of India from the 1850s. Behind each of these lies a story, of intrepid surveyors, ambitious navigators, chance finds or military victories. Drawing on the unique collection in the Bodleian Library, these stunning maps range from single cities to the solar system, span the thirteenth to the twenty-first century and cover most of the world.

Book Reviews - Treasures from the Map Room by Debbie Hall

» Have you read this book? We'd like to know what you think about it - write a review about Treasures from the Map Room book by Debbie Hall and you'll earn 50c in Boomerang Bucks loyalty dollars (you must be a Boomerang Books Account Holder - it's free to sign up and there are great benefits!)

Debbie Hall is a Senior Library Assistant in the Map Room of the Bodleian Library.