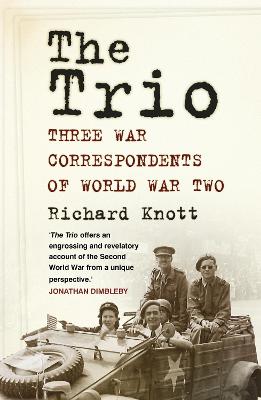 Description - The Trio by Richard Knott

'The Trio' tells the story of three war correspondents, two Englishmen and an Australian, all in their 30s, whose friendship was forged during the Second World War. They became so close that their colleagues dubbed them.'The Trio', sometimes out of disgruntled rivalry. Alan Moorehead, Alexander Clifford and Christopher Buckley worked for the Express, Mail and Telegraph respectively. Clifford and Moorehead lived together more closely than most married couples, and all three correspondents spent the war years travelling relentlessly, chasing news and writing stories, while being reliant on each other's friendship and mutual trust. They slept under the desert stars, in sumptuous Italian villas, in trains and army trucks. They were frequently in the line of fire, while their names became synonymous with the best war reporting. The Trio describes their relationship, what happened to each of them in the war and finally, when the fighting was over, how success gave way to personal tragedy. AUTHOR: Richard Knott is a historian and English teacher. He has written several books on the Second World War and articles for the Independent and The Times Educational Supplement. His most recent work is The Sketchbook War (The History Press, 2013). SELLING POINTS: The first book to focus on the men behind the headlines of the famous 'Trio' of Second World War reporting To mark the 70th anniversary of the end of the Second World War this book focuses on the way the war was shaped by the headlines and the men who made them Covers the famous "Trio" of war reporters: Alan Moorehead, Alexander Clifford and Christopher Buckley based with the Allied armies, especially British and American troops, in WW2 Their reportings dominated the Express, Mail and Telegraph broadsheets throughout the war 8pp colour, 30 b/w

» Have you read this book? We'd like to know what you think about it - write a review about Trio book by Richard Knott and you'll earn 50c in Boomerang Bucks loyalty dollars (you must be a Boomerang Books Account Holder - it's free to sign up and there are great benefits!)

Richard Knott is a researcher and writer of modern history who has also worked as an actor, English teacher and management consultant. He has written several books on the Second World War, the most recent of which is The Sketchbook War (The History Press, 2013). He lives in Somerset.

A Preview for this title is currently not available.
More Books By Richard Knott
View All