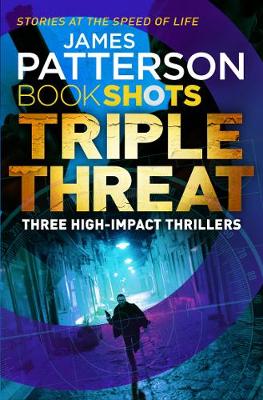 From the world's bestselling thriller writer, three pulse-pounding stories in one book!

CROSS KILL- Along Came a Spider killer Gary Soneji has been dead for over ten years. Alex Cross watched him die. But today, Cross saw him gun down his partner. Is Soneji alive? A ghost? Or something even more sinister? Nothing will prepare you for the wicked truth.

ZOO 2 (with Max DiLallo)- James Patterson's ZOO was just the beginning. The planet is still under violent siege by ferocious animals. Humans are their desperate prey. Except some humans are evolving, mutating into a savage species that could save civilisation - or end it.

THE PRETENDER (with Andrew Bourelle)- Logan Bishop is a thief living off a stash of stolen diamonds. But when his murderous ex-partner tracks him down, Logan must find a way to turn the tables - or lose the only woman who can handle the truth.

» Have you read this book? We'd like to know what you think about it - write a review about Triple Threat book by James Patterson and you'll earn 50c in Boomerang Bucks loyalty dollars (you must be a Boomerang Books Account Holder - it's free to sign up and there are great benefits!)

JAMES PATTERSON is one of the best-known and biggest-selling writers of all time. His books have sold in excess of 325 million copies worldwide and he has been the most borrowed author in UK libraries for the past nine years in a row. He is the author of some of the most popular series of the past two decades - the Alex Cross, Women's Murder Club, Detective Michael Bennett and Private novels - and he has written many other number one bestsellers including romance novels and stand-alone thrillers. James is passionate about encouraging children to read. Inspired by his own son who was a reluctant reader, he also writes a range of books for young readers including the Middle School, I Funny, Treasure Hunters, House of Robots, Confessions, and Maximum Ride series. James is the proud sponsor of the World Book Day Award and has donated millions in grants to independent bookshops. He lives in Florida with his wife and son.