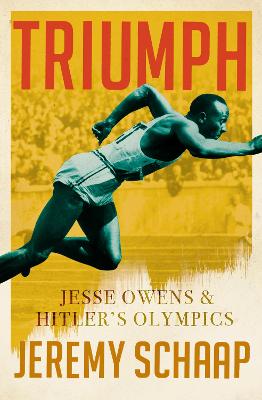 The remarkable behind-the-scenes story of Jesse Owens' triumphs at Hitler's Olympics: a defining moment in sports and world history.

The remarkable behind-the-scenes story of one of the most iconic clashes in sports and world history.

In 1936, against a backdrop of swastikas flying and storm troopers goose-stepping, an African-American athlete won a staggering four Olympic gold medals. Jesse Owens, the son of sharecroppers, had single-handedly crushed Hitler's myth of Aryan supremacy. The story of Jesse Owens at the 1936 games is that of a high-profile athlete giving a performance that transcends sports. But it is also the intimate and complex tale of the courage of one remarkable man.

This is the incredible true story of one of the moment a black athlete beat Hitler at his own games.

» Have you read this book? We'd like to know what you think about it - write a review about Triumph: Jesse Owens And Hitler's Olympics book by Jeremy Schaap and you'll earn 50c in Boomerang Bucks loyalty dollars (you must be a Boomerang Books Account Holder - it's free to sign up and there are great benefits!)

A Preview for this title is currently not available.
More Books By Jeremy Schaap
View All