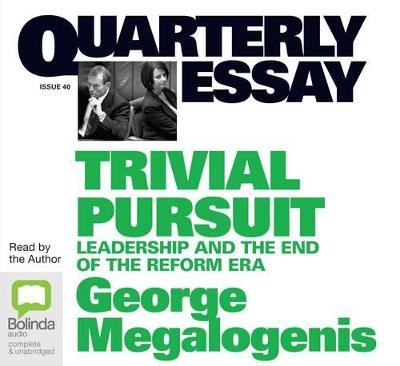 In the aftermath of the 2010 election, George Megalogenis considers what has happened to politics in Australia. Have we entered a new phase with minority government and the rise of the Greens and independents?

The Hawke, Keating and Howard years were ones of bold reform; recently we have seen an era of power without purpose. But why? Is it down to powerful lobbies, or the media, or a failure of leadership, or all of the above? And whatever the case, how will hard decisions be taken for the future?

In a brilliant analysis, Megalogenis dissects the cycle of polls, focus groups and presidential politics and explores what it has done to the prospect of serious, difficult reform and the style of our leaders. He argues that politics-as-usual has become a self-defeating game and mounts a persuasive case for a different model of leadership. 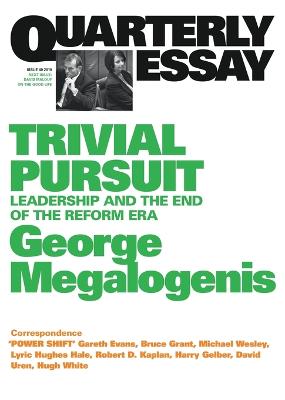 » Have you read this book? We'd like to know what you think about it - write a review about Trivial Pursuit book by George Megalogenis and you'll earn 50c in Boomerang Bucks loyalty dollars (you must be a Boomerang Books Account Holder - it's free to sign up and there are great benefits!)


A Preview for this title is currently not available.
More Books By George Megalogenis
View All

The Football Solution: How Richmond's premiership can save Australia
$18.39 $22.99

Football Solution: How Richmond's premiership can save Australia
$26.39 $32.99