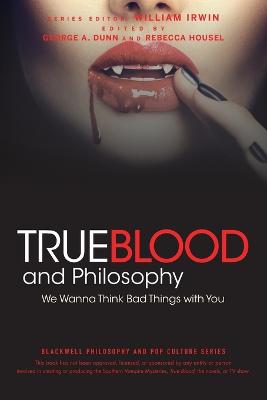 We Wanna Think Bad Things with You

The first look at the philosophical issues behind Charlaine
Harris's New York Times bestsellers The Southern Vampire
Mysteries and the True Blood television series
Teeming with complex, mythical characters in the shape of
vampires, telepaths, shapeshifters, and the like, True
Blood, the popular HBO series adapted from Charlaine Harris's
bestselling The Southern Vampire Mysteries, has a rich
collection of themes to explore, from sex and romance to bigotry
and violence to death and immortality. The goings-on in the
mythical town of Bon Temps, Louisiana, where vampires satiate their
blood lust and openly commingle with ordinary humans, present no
shortages of juicy metaphysical morsels to sink your teeth
into.
Now True Blood and Philosophy calls on the minds of some
of history's great thinkers to perform some philosophical
bloodletting on such topics as Sookie and the metaphysics of
mindreading; Maryann and sacrificial religion; werewolves,
shapeshifters and personal identity; vampire politics, evil,
desire, and much more.

Smart and entertaining, True Blood and Philosophy
provides food?or blood?for thought, and a fun, new way
to look at the series.

Other Editions - True Blood and Philosophy by William Irwin 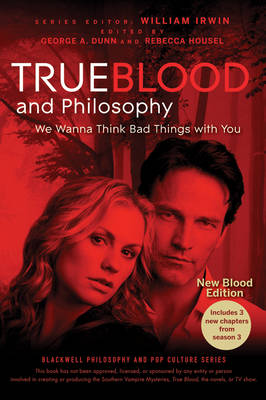 » Have you read this book? We'd like to know what you think about it - write a review about True Blood and Philosophy book by William Irwin and you'll earn 50c in Boomerang Bucks loyalty dollars (you must be a Boomerang Books Account Holder - it's free to sign up and there are great benefits!)

A Preview for this title is currently not available.
More Books By William Irwin
View All

Saturday Night Live and Philosophy: Deep Thoughts Through the Decades
$26.41 $26.95

Introducing Philosophy Through Pop Culture: From Socrates to South Park, Hume to House
$42.09 $42.95