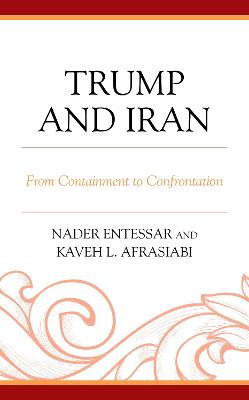 Trump and Iran: From Containment to Confrontation

Description - Trump and Iran: From Containment to Confrontation by Nader Entessar

With the advent of the Trump Administration, relations between Iran and the United States have become increasingly conflictual to the point that a future war between the two countries is a realistic possibility. President Trump has unilaterally withdrawn the US from the historic Iran nuclear accord and has re-imposed the nuclear-related sanctions, which had been removed as a result of that accord. Reflecting a new determined US effort to curb Iran's hegemonic behavior throughout the Middle East, Trump's Iran policy has all the markings of a sharp discontinuity in the Iran containment strategy of the previous six US administrations. The regime change policy, spearheaded by a hawkish cabinet with a long history of antipathy toward the Iranian government, has become the most salient feature of US policy toward Iran under President Trump. This turn in US foreign policy has important consequences not just for Iran but also for Iran's neighbors and prospects of long-term stability in the Persian Gulf and beyond. This book seeks to examine the fluid dynamic of US-Iran relations in the Trump era by providing a social scientific understanding of the pattern of hostility and antagonism between Washington and Tehran and the resulting spiraling conflict that may lead to a disastrous war in the region.

Book Reviews - Trump and Iran: From Containment to Confrontation by Nader Entessar

» Have you read this book? We'd like to know what you think about it - write a review about Trump and Iran: From Containment to Confrontation book by Nader Entessar and you'll earn 50c in Boomerang Bucks loyalty dollars (you must be a Boomerang Books Account Holder - it's free to sign up and there are great benefits!)


A Preview for this title is currently not available.
More Books By Nader Entessar
View All