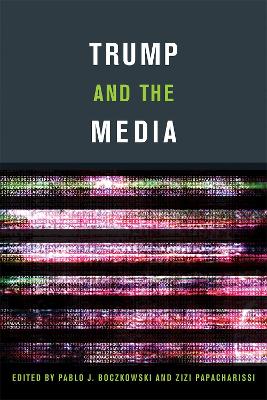 Trump and the Media

Description - Trump and the Media by Pablo J. Boczkowski

The election of Donald Trump and the great disruption in the news and social media.Donald Trump's election as the 45th President of the United States came as something of a surprise-to many analysts, journalists, and voters. The New York Times's The Upshot gave Hillary Clinton an 85 percent chance of winning the White House even as the returns began to come in. What happened? And what role did the news and social media play in the election? In Trump and the Media, journalism and technology experts grapple with these questions in a series of short, thought-provoking essays. Considering the disruption of the media landscape, the disconnect between many voters and the established news outlets, the emergence of fake news and "alternative facts," and Trump's own use of social media, these essays provide a window onto broader transformations in the relationship between information and politics in the twenty-first century.
The contributors find historical roots to current events in Cold War notions of "us" versus "them," trace the genealogy of the assault on facts, and chart the collapse of traditional news gatekeepers. They consider such topics as Trump's tweets (diagnosed by one writer as "Twitterosis") and the constant media exposure given to Trump during the campaign. They propose photojournalists as visual fact checkers ("lessons of the paparazzi") and debate whether Trump's administration is authoritarian or just authoritarian-like. Finally, they consider future strategies for the news and social media to improve the quality of democratic life.
Contributors
Mike Ananny, Chris W. Anderson, Rodney Benson, Pablo J. Boczkowski, danah boyd, Robyn Caplan, Michael X. Delli Carpini, Josh Cowls, Susan J. Douglas, Keith N. Hampton, Dave Karpf, Daniel Kreiss, Seth C. Lewis, Zoey Lichtenheld, Andrew L. Mendelson, Gina Neff, Zizi Papacharissi, Katy E. Pearce, Victor Pickard, Sue Robinson, Adrienne Russell, Ralph Schroeder, Michael Schudson, Julia Sonnevend, Keren Tenenboim-Weinblatt, Tina Tucker, Fred Turner, Nikki Usher, Karin Wahl-Jorgensen, Silvio Waisbord, Barbie Zelizer

Book Reviews - Trump and the Media by Pablo J. Boczkowski

» Have you read this book? We'd like to know what you think about it - write a review about Trump and the Media book by Pablo J. Boczkowski and you'll earn 50c in Boomerang Bucks loyalty dollars (you must be a Boomerang Books Account Holder - it's free to sign up and there are great benefits!)


A Preview for this title is currently not available.
More Books By Pablo J. Boczkowski
View All