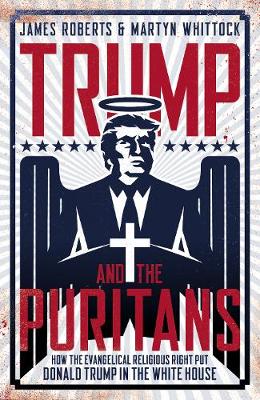 Trump and the Puritans

Description - Trump and the Puritans by James Roberts

The year 2020 is a hugely significant one for the United States of America, marking as it does the 400th anniversary of the arrival of the Mayflower Pilgrims to the New World and their establishment of a 'godly' colony in (what was for them) the 'American wilderness'. But it is also the year of the next Presidential election, one where the current occupant is expected to stand for re-election.

Many millions of Americans will not see this as a random juxtaposition of events, since for them the unlikely person of Donald Trump is the one chosen by God to implement a twenty-first-century programme of godly rule and the restoration of American spiritual exceptionalism that is directly rooted in those far-off times when Puritan settlers (who followed in 1630) first established a semi-theocratic 'New Jerusalem' in the 'New World'.

The USA is the home of more Christians than any other nation on earth. In 2014 research revealed that 70.6 per cent of Americans identified as Christians of some form with 25.4% identifying as 'Evangelicals'. Eighty-one per cent of them, around 33.7 million people, voted Trump in 2016. How can it be that self-described Christians of the 'Evangelical Religious Right' see, of all people, Donald Trump as their political representative and thus defender of their cause?

Book Reviews - Trump and the Puritans by James Roberts

» Have you read this book? We'd like to know what you think about it - write a review about Trump and the Puritans book by James Roberts and you'll earn 50c in Boomerang Bucks loyalty dollars (you must be a Boomerang Books Account Holder - it's free to sign up and there are great benefits!)


A Preview for this title is currently not available.
More Books By James Roberts
View All