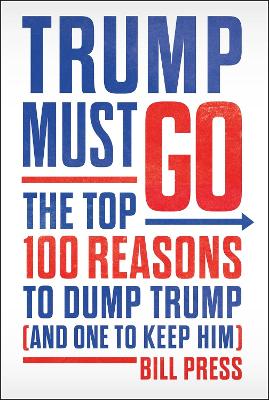 Americans increasingly agree on one thing: Every day that Trump stays in office, he diminishes the United States and its people.

In Trump Must Go, TV and radio host Bill Press offers 100 reasons why Trump needs to be removed from office, whether by impeachment, the 25th Amendment, or the ballot box.

Beginning with the man himself and moving through Trump's executive action damage, Press covers Trump's debasement of the United States political system and destruction of the Republican Party. Ranging from banning federal employees' use of the phrase "climate change," to putting down Haiti, ElSalvador, and African nations as "shithole" countries, we have to wonder what he'll do next. He has a bromance with Putin that enables several meetings between Trump staffers and Russian officials, and he has a wrecking crew administration: Attorney General Jeff Sessions, Education Secretary BetsyDeVos, and Housing Secretary Ben Carson, to name a few. Extensive "executive time" marks Trump's calendar so he can golf, watch TV, and eat fast food. Trump has done it all.badly.

But, in a political climate where the world has learned to expect the unexpected, Press offers readers a twist: one reason not to ditch Donald Trump.

» Have you read this book? We'd like to know what you think about it - write a review about Trump Must Go book by Bill Press and you'll earn 50c in Boomerang Bucks loyalty dollars (you must be a Boomerang Books Account Holder - it's free to sign up and there are great benefits!)

BILL PRESS is host of The Bill Press Show, simulcast on Free Speech TV. He is the former co-host of MSNBC's Buchanan and Press and CNN's Crossfire and The Spin Room. Press is the author of several books including From the Left and The Obama Hate Machine. He currently resides in Washington, DC.

A Preview for this title is currently not available.
More Books By Bill Press
View All