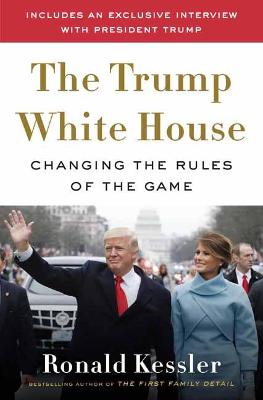 Changing the Rules of the Game

The real story of President Donald Trump and his White House.

Never before has an American president had so much impact on the country and the world in so short a time as Donald Trump. And no president has stirred so much controversy, dominating media coverage and conversation both on the right and the left.

Based on unique access, Inside the Trump White House- Changing the Rules of the Game tells the real story of what Donald Trump is like, who influences him, how he makes decisions, what he says about the people around him, and how he operates when the television lights go off, while portraying the inside story of the successes that have already brought solid results as well as the stumbles that have turned off even longtime supporters and undercut his agenda.

Other Editions - The Trump White House by Ronald Kessler » Have you read this book? We'd like to know what you think about it - write a review about Trump White House book by Ronald Kessler and you'll earn 50c in Boomerang Bucks loyalty dollars (you must be a Boomerang Books Account Holder - it's free to sign up and there are great benefits!)

Ronald Kessler is the New York Times bestselling author of The First Family De tail, The Secrets of the FBI, In the President's Secret Service, and The CIA at War. A former Wall Street Journal and Washington Post investigative reporter, Kessler has won eighteen journalism awards, including two George Polk Awards: one for national reporting and one for community service. He was named a Washingtonian of the Year by Washingtonian magazine. Kessler lives in Potomac, Maryland, with his wife, author Pamela Kessler.

A Preview for this title is currently not available.
More Books By Ronald Kessler
View All