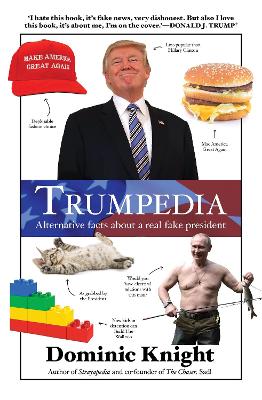 'This book has the biggest sales numbers ever. No other book comes close, period.'
Sean Spicer

'Psst, want a copy of the Trumpedia audiobook? I taped the whole thing.'
Michael Cohen

'The pages have good people on both sides.'
Steve Bannon

'The president misspoke-he meant that he wouldn't like to read this book.'
Sarah Huckabee Sanders

'Every word is a lie, it's all true, and Trump should be locked up because he's innocent.'
Rudy Giuliani

'Trumpedia makes me proud to be the wife of the first African-American president. Be best!'
Melania Trump

Featuring his unlikely successes in television, wrestling and politics, along with disasters like Trump Vodka, Trump 'University' and Trump Child Incarceration, Trumpedia is a roller coaster ride from the absurd to the ridiculous to the genuinely disturbing. It's just like following Trump on Twitter.

» Have you read this book? We'd like to know what you think about it - write a review about Trumpedia: Alternative facts about a real fake president book by Dominic Knight and you'll earn 50c in Boomerang Bucks loyalty dollars (you must be a Boomerang Books Account Holder - it's free to sign up and there are great benefits!)


A Preview for this title is currently not available.
More Books By Dominic Knight
View All