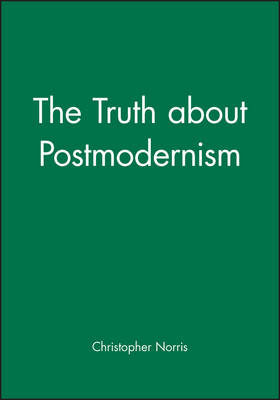 The Truth About Postmodernism

Description - The Truth About Postmodernism by Christopher Norris

This book was written with a view to sorting our some of the
muddles and misreadings - especially misreadings of Kant - that
have charaterized recent postmodernist and post-structuralist
thought. For these issues have a relevance, as Norris argues, far
beyond the academic enclaves of philosophy, literary theory, and
cultural criticism. Thus he makes large claims for the importance
of getting Kant right on the relation between epistemology, ethics
and aesthetics; for pursuing the Kantian question 'What is
Enlightenment?' as raised in Foucault's late essays; or again, for
recalling William Empson's spirited attempt to reassert the values
of reason and truth against the orthodox 'lit crit' wisdom of his
time. These are specialized concerns. But for better or worse it
has been largely in the context of 'theory'- that capacious though
ill-defined genre- that such issues have received their most
scrutiny over the past two decades.
As its title suggests, The Truth About Postmodernism
disputes a good deal of what currently passes for advance
theoretical wisdom. Above all it mounts a challenge to those
fashionable doctrines - variants of the 'end-of-ideology' theme -
that assimilate truth to some existing range of language-games,
discourses, or in-place consensus beliefs. Norris's book will be
welcomed for its clarity of style, its depth of philosophical
engagement, and its refusal to endorse the more facile varieties of
present-day textualist thought. It will also serve as a timely
reminder that the 'politics of theory' cannot be practised in safe
isolation from the politics (and ethics) of activist social
concern.

Book Reviews - The Truth About Postmodernism by Christopher Norris

» Have you read this book? We'd like to know what you think about it - write a review about Truth About Postmodernism book by Christopher Norris and you'll earn 50c in Boomerang Bucks loyalty dollars (you must be a Boomerang Books Account Holder - it's free to sign up and there are great benefits!)


A Preview for this title is currently not available.
More Books By Christopher Norris
View All