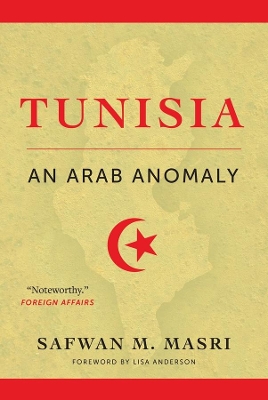 The Arab Spring began and ended with Tunisia. In a region beset by brutal repression, humanitarian disasters, and civil war, Tunisia's Jasmine Revolution alone gave way to a peaceful transition to a functioning democracy. Within four short years, Tunisians passed a progressive constitution, held fair parliamentary elections, and ushered in the country's first-ever democratically elected president. But did Tunisia simply avoid the misfortunes that befell its neighbors, or were there particular features that set the country apart and made it a special case?

In Tunisia: An Arab Anomaly, Safwan M. Masri explores the factors that have shaped the country's exceptional experience. He traces Tunisia's history of reform in the realms of education, religion, and women's rights, arguing that the seeds for today's relatively liberal and democratic society were planted as far back as the middle of the nineteenth century. Masri argues that Tunisia stands out not as a model that can be replicated in other Arab countries, but rather as an anomaly, as its history of reformism set it on a separate trajectory from the rest of the region. The narrative explores notions of identity, the relationship between Islam and society, and the hegemonic role of religion in shaping educational, social, and political agendas across the Arab region. Based on interviews with dozens of experts, leaders, activists, and ordinary citizens, and a synthesis of a rich body of knowledge, Masri provides a sensitive, often personal, account that is critical for understanding not only Tunisia but also the broader Arab world.

Other Editions - Tunisia: An Arab Anomaly by Safwan M. Masri » Have you read this book? We'd like to know what you think about it - write a review about Tunisia: An Arab Anomaly book by Safwan M. Masri and you'll earn 50c in Boomerang Bucks loyalty dollars (you must be a Boomerang Books Account Holder - it's free to sign up and there are great benefits!)


A Preview for this title is currently not available.
More Books By Safwan M. Masri
View All