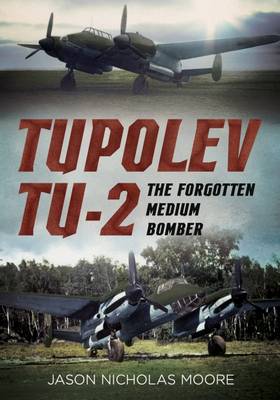 Although one of the best medium bombers of the Second World War, fast, tough, and with an excellent bomb load, the Tu-2 is little known in the West. This book provides a comprehensive history of this important aeroplane, complete with its developmental history in the Second World War and later, and its long postwar history, both with the Soviet Union and other countries. First produced in 1942, the Tu-2's initial production ended in 1943, then as its combat capabilities became clear, it was reinstated into production. Because of the stop in production, the Tu-2 was not used in large numbers until the last year of the war, where it proved a very useful weapon indeed. Neither its development nor production stopped with the end of the war, and it was developed into additional variants, including an all-weather fighter. In addition to its service in the Great Patriotic War, it saw service in the Korean War with the Chinese Air Force. This book also features accurate colour profiles of the Tu-2 in the colours of the various nations it was in service with postwar, as well as colour profiles from its wartime service with the Red Air Force.

» Have you read this book? We'd like to know what you think about it - write a review about Tupolev Tu-2 book by Jason Nicholas Moore and you'll earn 50c in Boomerang Bucks loyalty dollars (you must be a Boomerang Books Account Holder - it's free to sign up and there are great benefits!)

Jason Nicholas Moore is an avid air historian and modeller, with a particular interest in Soviet aeroplanes and has spent the last 40 years doing both historical research and constructing model aeroplanes. He has written a comprehensive history on the Il-2 Shturmovik and in addition he has written a comprehensive modelling guide to the Il-2 Shturmovik which has not been published. He has spent much of the last 30 years researching Soviet aircraft in general, and has read very extensively on the war on the Eastern Front.

A Preview for this title is currently not available.
More Books By Jason Nicholas Moore
View All