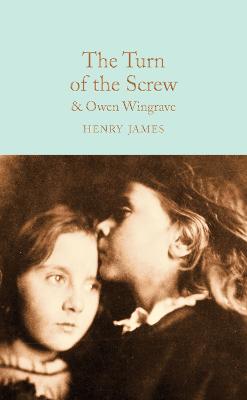 The Turn of the Screw and Owen Wingrave

A young governess is employed to look after two orphaned siblings in a grand country house. Isolated and inexperienced, she is at first charmed by the children - but gradually suspects that they may not be as innocent as they seem. She soon begins to see sinister figures at the window, but do they exist solely in her imagination, or are they ghosts intent on a terrible and devastating task? The Turn of the Screw is one of the most famous and eerily equivocal ghost stories ever written.

Owen Wingrave is the story of a son in a long line of military heroes who refuses to follow tradition, yet proves his bravery in a haunted room.

Buy The Turn of the Screw and Owen Wingrave by Henry James from Australia's Online Independent Bookstore, Boomerang Books. » Have you read this book? We'd like to know what you think about it - write a review about Turn of the Screw and Owen Wingrave book by Henry James and you'll earn 50c in Boomerang Bucks loyalty dollars (you must be a Boomerang Books Account Holder - it's free to sign up and there are great benefits!)

Henry James was born in New York in 1843 and was educated in Europe and America. He left Harvard Law School in 1863, after a year's attendance, to concentrate on writing, and from 1869 he began to make prolonged visits to Europe, eventually settling in England in 1876. His literary output was prodigious and of the highest quality: more than ten outstanding novels, including The Portrait of a Lady and The American; countless novellas and short stories; as well as innumerable essays, letters, and other pieces of critical prose. Known by contemporary fellow novelists as `The Master', James died in London in 1916.