TV Outside the Box

Trailblazing in the Digital Television Revolution

Description - TV Outside the Box by Neil Landau

TV Outside the Box: Trailblazing in the Digital Television Revolution explores the new and exploding universe of on-demand, OTT (Over the Top) networks: Netflix, Amazon, Hulu, Crackle, CW Seed, Vimeo, AwesomenessTV, and many more. Featuring in-depth conversations with game-changing content creators, industry mavericks, and leading cultural influencers, TV Outside the Box is essential reading for anyone interested in the dynamics of a global media revolution - while it's happening. Readers will discover:

Other Editions - TV Outside the Box by Neil Landau 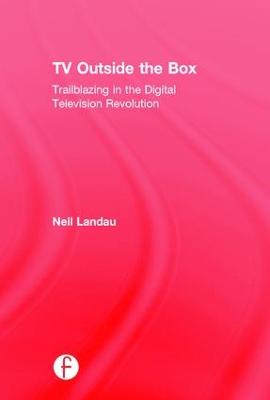 Book Reviews - TV Outside the Box by Neil Landau

» Have you read this book? We'd like to know what you think about it - write a review about TV Outside the Box book by Neil Landau and you'll earn 50c in Boomerang Bucks loyalty dollars (you must be a Boomerang Books Account Holder - it's free to sign up and there are great benefits!)

Neil Landau is a bestselling author, producer and award winning screenwriter who runs the Writing for Television program in the UCLA Department of Film, Television and Digital Media (his alma mater). Credits include Don't Tell Mom the Babysitter's Dead; Melrose Place, The Magnificent Seven, Doogie Howser, M.D., The Secret World of Alex Mack, Twice in a Lifetime, MTV's Undressed, and one-hour drama pilots for CBS, ABC, ABC Family, Warner Bros., Disney, Lifetime, and Fremantle. Neil has also served as Executive Script Consultant for Sony Pictures Television and Columbia Pictures. His animated movie projects include the Tad: The Lost Explorer, which earned him a Spanish Academy "Goya" Award for Best Adapted Screenplay; Capture the Flag for Paramount; and Sheep & Wolves for Wizart Animation. He's the author of the bestselling 101 Things I Learned in Film School; The Screenwriter's Roadmap, and The TV Showrunner's Roadmap.

A Preview for this title is currently not available.
More Books By Neil Landau
View All

The TV Showrunner's Roadmap: 21 Navigational Tips for Screenwriters to Create and Sustain a Hit TV Series
$226.80 $252.00