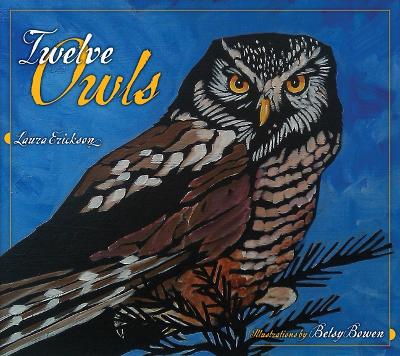 Meet the saw-whet, the tiniest of Minnesota's owls, a mere eight inches from the tip of its blunt tail to the top of its rounded head. The simplest way to find one is to listen for the scolding calls of a flock of agitated chickadees. Or, if you're lucky, you might witness the male throwing all caution to the wind and "co-co-co-co-ing" for a mate, inching forward on every note like the bird in a cuckoo clock.

From this fetching little creature to the magnificent great gray, the owls of Minnesota have found the perfect spokeswoman in this book, which is as charming as it is informative. Written with wit and a remarkable command of bird lore by Laura Erickson, well known to public radio listeners and birdwatchers everywhere, Twelve Owls also features enchanting pictures, from the long view to up-close detail, by award-winning artist Betsy Bowen.

"Who cooks for you? Who cooks for you?" the barred owl asks, breaking into a duet that sounds like maniacal laughter when he gets lucky. The great gray, the biggest of the state's-and perhaps the world's-owls, hurls herself into the snow and fetches up a meadow vole, leaving behind a beautiful snow angel.

The telling detail, the natural drama, the identifying features, and the environmental story all unfold in Erickson's engaging account of what to look for, where to look, and what these much-mythologized but very real denizens of the bird kingdom might be doing in the state of Minnesota.

» Have you read this book? We'd like to know what you think about it - write a review about Twelve Owls book by Laura Erickson and you'll earn 50c in Boomerang Bucks loyalty dollars (you must be a Boomerang Books Account Holder - it's free to sign up and there are great benefits!)

Laura Erickson is the author of several books about ornithology, including For the Birds, Sharing the Wonder of Birds with Kids, 101 Ways to Help Birds, and The Bird Watching Answer Book. Her twenty-five-year-old radio program For the Birds is the longest running on the topic in the country and airs on more than a dozen radio stations. She lives in Duluth, Minnesota. Betsy Bowen is a woodcut printmaker and painter who has illustrated several books, among them Great Wolf and the Good Woodsman and Big Belching Bog, both available from the University of Minnesota Press. She lives in Grand Marais, Minnesota.

A Preview for this title is currently not available.
More Books By Laura Erickson
View All