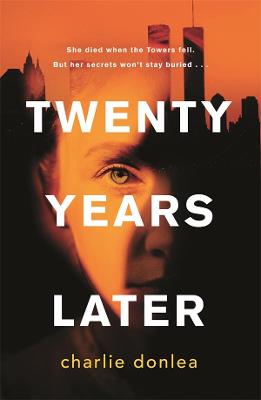 The terror attack that shocked the world ... A decades-old murder about to be solved ... A gripping new thriller from the author of the bestselling The Girl Who Was Taken.

Releasing on the 20th anniversary of the 9/11 terror attacks, Charlie Donlea's exciting new suspense novel sees a victim from the North Tower make her voice heard two decades on...

With new technology the New York medical examiner's office has made its first successful identification of a 9/11 victim in years. The twist- the victim in question, Victoria Ford, had been accused of murder at the time of her death. In a chilling last call from the North Tower, Victoria had begged her sister, Emma, to prove her innocence.

Twenty years later, Emma is convinced that Avery's connections and fame will help her do just that. And Avery, hoping to negotiate a more lucrative contract, goes into investigative overdrive.

But the twisted puzzle of Victoria's life belies a much darker mystery. And there are other players in the game who are interested in Avery's own past - one she has kept secret from both the TV executives and her audience. A secret she thought was dead and buried . . .
'A bold new writer on his way to becoming a major figure in the world of suspense.' Publishers Weekly
'Definitely a talent to watch.' Steve Berry

» Have you read this book? We'd like to know what you think about it - write a review about Twenty Years Later book by Charlie Donlea and you'll earn 50c in Boomerang Bucks loyalty dollars (you must be a Boomerang Books Account Holder - it's free to sign up and there are great benefits!)


A Preview for this title is currently not available.
More Books By Charlie Donlea
View All