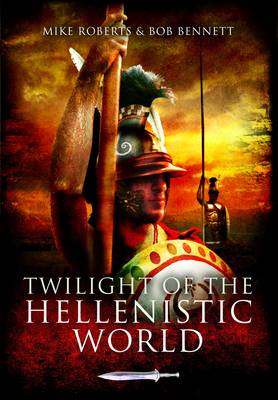 Twilight of the Hellenistic World

Description - Twilight of the Hellenistic World by Mike Roberts

This book recounts and analyses the complex series of conflicts between the Hellenistic Successor states in the generation before the Romans intervened in, and ultimately conquered, the region. This period is rarely treated in any depth, usually warranting little more than a summary as context for a discussion of the Roman conquests. The authors demonstrate that this period of almost-constant conflict and rivalry makes a fascinating subject of study in its own right. For example, it describes Macedon's war with Cleomenes and the final crushing of a much-diminished Sparta as an independent power; also the campaigns in the east whereby the Seleucid king, Antiochus (later defeated by the Romans at Magnesia) earned his title of Antiochus the Great. They show how the Hellenistic monarchs, while aware of Rome's epic clash with Carthage in the West, did not yet see her as a major threat and were preoccupied with more immediate concerns. As well as clearly narrating the complex events, Roberts and Bennet assess the various military systems of the Hellenistic states and developments in warfare on land and sea. This is a very original book on a neglected period of politico-military history. ILLUSTRATIONS: 8 pages of b/w photographs plus maps & battle plans *

Book Reviews - Twilight of the Hellenistic World by Mike Roberts

» Have you read this book? We'd like to know what you think about it - write a review about Twilight of the Hellenistic World book by Mike Roberts and you'll earn 50c in Boomerang Bucks loyalty dollars (you must be a Boomerang Books Account Holder - it's free to sign up and there are great benefits!)


A Preview for this title is currently not available.
More Books By Mike Roberts
View All

Alexander the Great's Legacy: The Decline of Macedonian Europe in the Wake of the Wars of the Successors
$67.50 $75.00