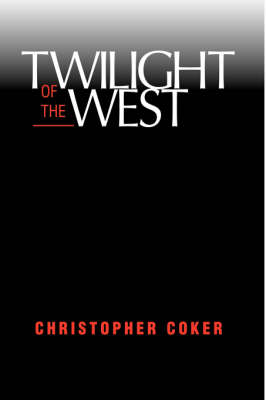 Twilight Of The West

Description - Twilight Of The West by Christopher Coker

It would have been inconceivable," wrote Henry Kissinger in his best-selling book Diplomacy, that the architects of NATO would have seen as the end result of victory in the Cold War greater diversity within the Alliance." In Twilight of the West, Christopher Coker offers an interpretation of why the Western Alliance is in serious trouble and why it may have entered the twilight of its collective life. Divided into three parts, the book first looks at the cultural forces that brought the Western powers together in 1941 and prompted them to build an Atlantic Community. Where the Alliance failed, however, was in taking hold where it counted most, in the European imagination. The second part addresses the present-day consciousness of both Europe and the United States as they prepare for the twenty-first century. In the final section, Coker examines two key questions: whether the West can escape the undertow of violence that marks the end of the millennium and whether the challenges from East Asia and the Islamic world are of such magnitude that the West will have to reinvent itself. Throughout, Coker draws on a wide-ranging discussion of Western culture to understand the changes that are taking place in the Western world. Particular emphasis is placed on the changes in philosophy that helped shape the Alliance and its view of the rest of the world.

Book Reviews - Twilight Of The West by Christopher Coker

» Have you read this book? We'd like to know what you think about it - write a review about Twilight Of The West book by Christopher Coker and you'll earn 50c in Boomerang Bucks loyalty dollars (you must be a Boomerang Books Account Holder - it's free to sign up and there are great benefits!)

Christopher Coker teaches at the London School of Economics.

A Preview for this title is currently not available.
More Books By Christopher Coker
View All