Six hilarious stories which will change your opinion of fairy tales forever!

Six hilarious stories which will change your opinion of fairy tales forever!

Quirky, funny, and full of rhyming, alliteration and word play that will captivate beginner readers, Twisted Tales is a collection of stories that will delight parents and children alike.

A kind and friendly but very hungry wolf, a lizard who is horrified to be turned into a footman (whatever that is), a grumpy princess who can't sleep, a slightly deaf king, a witch who runs the Happy Healthy Holiday Home, and a cow whose poop turn out to be magic after all . . .

Told by the so-called villains, innocent bystanders and other victims of fairy tale crime, these stories have to be read to be appreciated! 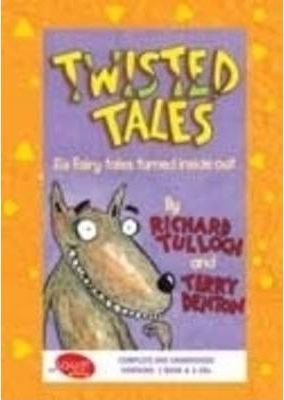 » Have you read this book? We'd like to know what you think about it - write a review about Twisted Tales book by Richard Tulloch and you'll earn 50c in Boomerang Bucks loyalty dollars (you must be a Boomerang Books Account Holder - it's free to sign up and there are great benefits!)

RICHARD TULLOCH has written over sixty children's books, heaps of plays and numerous scripts for children's TV series, including the famous Bananas in Pyjamas and New McDonald's Farm and the screenplay for the animated feature film Ferngully II- The Magical Rescue. Richard lives with his wife in Sydney and spends part of each year based in Amsterdam. In between times he travels the world, performing his storytelling show Storyman and teaching writing workshops in schools.